DeSoto is a suburb of Dallas and is part of the Best Southwest area, which includes DeSoto, Cedar Hill, Duncanville, and Lancaster.

The area was first settled in 1847, making it one of the oldest communities in North Texas. A post office was established in 1881, and the settlement was named DeSoto in honor of Thomas Hernando DeSoto Stewart, a doctor dedicated to the community.

By 1885, DeSoto was home to approximately 120 people, a cotton gin, and a general store. Soon after, the population declined to below 50. In 1930, there were 97 people living in the community and several businesses.

After World War II, DeSoto and surrounding areas began to grow. In order to improve the inadequate water distribution system, residents felt the need to incorporate the town. On February 17, 1949, a petition signed by 42 eligible voters was presented to the Dallas County judge requesting an election for incorporation. The vote took place on March 2. Of the 52 people who cast ballots, 50 voted in favor of incorporation and 2 were opposed. On March 3, 1949, the results were entered into the records of the Dallas County Commissioners Court, thereby creating the City of DeSoto. The new city was less than one square mile in size. On March 15, Wayne A. Chowning was elected mayor along with five aldermen. The first city council meeting was held two days later.

During the 1970s, continued growth brought about improvements to the municipal infrastructure, including road construction, and a new water/sewage system. Industrial, commercial, and residential construction also increased.

On October 26, 1974, an election was held to determine the status of Woodland Hills, a small incorporated community located northwest of DeSoto. The result was 221 votes in favor of a merger with DeSoto and 219 opposed. Woodland Hills had a population of 366 at the time of annexation.

The population surpassed 30,000 in 1990. City development progressed in the following years. A primary example of this was the creation of DeSoto's Town Center. Officials converted an abandoned strip center located at one of the city's main intersections into a unique central business district. Since its opening, the Town Center has become an anchor of the community, housing city hall, the public library, a civic center and the recreation center. There is also a 180-seat auditorium and outdoor amphitheater.

With approximately 45,500 residents as of 2005, DeSoto is the largest and most diverse city in southwest Dallas County.

On June 11, 2006, the National Civic League named DeSoto an "All-America City". The All-America City Award is the nation's oldest community recognition program and recognizes communities whose citizens work together to identify and tackle community-wide challenges and achieve uncommon results.

In 2015, a viral article was published about the growing trend of largely affluent and college-educated African-Americans moving to the Desoto and other Best Southwest communities.

According to the United States Census Bureau, the city has a total area of 21.6 square miles (56 km2), all of it land. 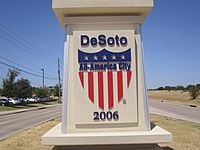 There were 13,709 households out of which 39.5% had children under the age of 18 living with them, 58.8% were married couples living together, 14.1% had a female householder with no husband present, and 23.7% were non-families. 20.6% of all households were made up of individuals and 6.1% had someone living alone who was 65 years of age or older. The average household size was 2.71 and the average family size was 3.14.

The DeSoto city logo was adopted on August 26, 1976. The logo, a large "D", has the head of an eagle in the middle (the school district's mascot, see above) outlined on the inside. It is featured prominently on the city flag, water towers, and municipal government documents.

All content from Kiddle encyclopedia articles (including the article images and facts) can be freely used under Attribution-ShareAlike license, unless stated otherwise. Cite this article:
DeSoto, Texas Facts for Kids. Kiddle Encyclopedia.