Dunn Butte, is a 5,714 foot-elevation-summit, a minor butte, along a line of three summits along the west drainage of Ninetyone Mile Canyon and Creek. From higher elevation-to-lower, they are Angels Gate, Dunn Butte, and Hawkins Butte. The bases of all three landforms are connected, and Dunn Butte is a south-southwest ridgeline, with the high point prominence at the northeast terminus.

The massif of Wotans Throne is adjacent 1.0 mi northeast. The Cape Royal viewpoint is ~2.0 mi northeast; Dunn Butte is 2.0 north of the Colorado River, its drainage point.

The prominence geology of Dunn Butte is based on the massifs of Supai Group upon the cliff-former, (and therefore platform-former), of Redwall Limestone. The Supai Group (and Redwall), massifs are also found on the parent (and connected landform), of Angels Gate, and neighboring butte northwest, Thor Temple. 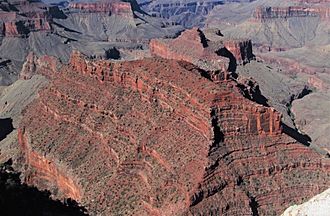 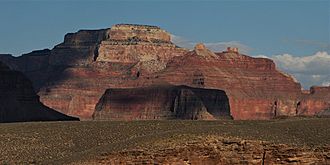 The three prominence-bases of neighboring Angels Gate and Dunn Butte, and close by Thor Temple (northwest), are composed of Supai Group. Unit 4, Supai, is the cliff-former, (and therefor platform-former), Esplanade Sandstone, that has a common, and sometimes thick presence, in nearly all regions of the Grand Canyon.

Dunn Butte, at 5,714 ft is ~1000 ft lower, and its platform ridgeline is Supai Group, unit 2, (the cliff and platform unit), Manakacha Formation, upon slopes of slope-forming Watahomigi Formation. Again, the Supai Group lies upon the platform of the Redwall Limestone massif.

All content from Kiddle encyclopedia articles (including the article images and facts) can be freely used under Attribution-ShareAlike license, unless stated otherwise. Cite this article:
Dunn Butte Facts for Kids. Kiddle Encyclopedia.