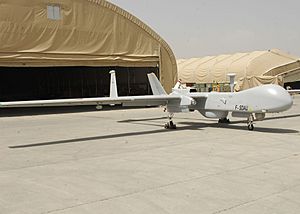 The EADS Harfang is an unmanned aerial vehicle developed for service in the French Air Force.

The project was inspired by the IAI Heron, an Israeli drone aircraft shown at the 1999 Paris Air Show. It was built by EADS, the European Aeronautics and Space company now part of Airbus.

Its name comes from Harfang des neiges, the French name for the snowy owl, a raptor (bird of prey).

The Harfang is a twin-boom aircraft, propelled by a rear-mounted engine. Avionics include GPS. It has no weapon on board.

In May 2011, it was used for observation of the G8 meeting in Deauville. In January 2013, France used this plane for reconnaissance against Islamist terrorists who occupy the north of Mali.

All content from Kiddle encyclopedia articles (including the article images and facts) can be freely used under Attribution-ShareAlike license, unless stated otherwise. Cite this article:
EADS Harfang Facts for Kids. Kiddle Encyclopedia.