Eagle Mountain is a 2,836-metre (9,304-foot) mountain summit located immediately northeast of the Banff Sunshine ski resort in Banff National Park of Alberta, Canada. The mountain's name was officially adopted in 1958 when approved by the Geographical Names Board of Canada. Its nearest higher peak is Mount Howard Douglas, 1.51 km (0.94 mi) to the south-southeast.

An interesting feature of Eagle Mountain is a natural window officially named Goat's Eye located on the northeast ridge which leads many to call it Goat's Eye Mountain. It was first noted by George Simpson who wrote of it: "a very peculiar feature in an opening of about eighty feet by fifty, which, as we advanced nearer, assumed the appearance of the gateway of a giant's fortress."

Like other mountains in Banff Park, Eagle Mountain is composed of sedimentary rock laid down from the Precambrian to Jurassic periods. Formed in shallow seas, this sedimentary rock was pushed east and over the top of younger rock during the Laramide orogeny.

Based on the Köppen climate classification, Eagle Mountain is located in a subarctic climate with cold, snowy winters, and mild summers. Temperatures can drop below -20 °C with wind chill factors below -30 °C. Precipitation runoff from Eagle Mountain drains into tributaries of the Bow River. 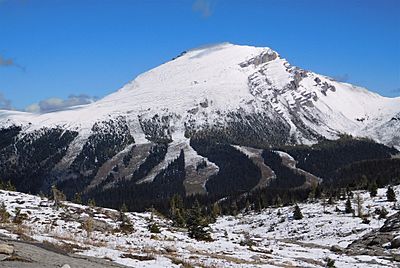 Eagle Mountain from the west

All content from Kiddle encyclopedia articles (including the article images and facts) can be freely used under Attribution-ShareAlike license, unless stated otherwise. Cite this article:
Eagle Mountain (Alberta) Facts for Kids. Kiddle Encyclopedia.