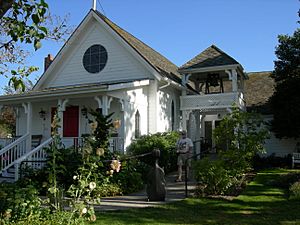 Eastsound (not to be confused with East Sound, which is the body of water adjoining Eastsound) is an unincorporated community on Orcas Island in San Juan County, Washington, United States.

The first inhabitants of Eastsound were the Lummi tribe, who were often raided by the warlike Haida, who traveled from Southeast Alaska in massive war canoes to attack the Lummis, for the purpose of slaving. The Haida had a distinct advantage, armed with flintlock rifles obtained from Russian traders. The first white people arrived in the 1850s, employees of the Hudson's Bay Company sent from the Fort Victoria post to hunt deer. These trappers brought smallpox, which, combined with the brutal Haida attacks, significantly reduced the native population.

One of the first European settlers of Eastsound was Charles Shattuck, who built a log cabin and operated a store in the late 1850s. Other early inhabitants of note included Michael Adams, a prospector and trapper from Pennsylvania and horticulturalist who planted the first apple orchard on Orcas. Belle Langell was the first white child born on Orcas, the daughter of Ephraim and Rosa Langell, who homesteaded near Michael Adams in present-day Eastsound. The Emmanuel Episcopal Church (Eastsound, Washington) was the first church on Orcas Island, was built in 1885, by the Reverend Sidney Robert Spencer Gray, on a plot of land deeded from Charles Shattuck.

Steamboats of the Puget Sound Mosquito Fleet used to dock at East Sound, one such vessel was the Sioux, a steel steamship built in 1910 and running out of Bellingham under the ownership of the Black Ball Line.

All content from Kiddle encyclopedia articles (including the article images and facts) can be freely used under Attribution-ShareAlike license, unless stated otherwise. Cite this article:
Eastsound, Washington Facts for Kids. Kiddle Encyclopedia.