Economy of Birmingham facts for kids 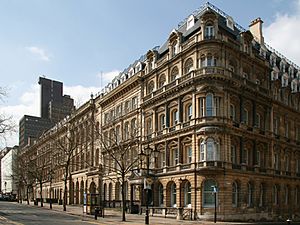 The city of Birmingham, in England, is an important manufacturing and engineering centre, employing over 100,000 people in the industry and contributing billions of pounds to the national economy. During 2013, the West Midlands region as a whole created UK exports in goods worth £19.4 billion, around 8.7% of the national total, however exports fell by 14.5% compared to 2012 and there is a trade deficit of £5.6 billion. Output was forecast to grow from 2007 to 2012, but the city's economy flat-lined in from 2007 to 2009, following the economic crisis which affected the economies of countries around the world.

Birmingham was second only to London for the creation of new jobs between 1951 and 1961, and unemployment rarely exceeded 1% between 1948 and 1966. By 1961, household incomes in the West Midlands (county) were 13% above the national average, exceeding even London and the South East. However, the incoming Labour government of 1964 sought to control what it saw as a "threatening situation", most notably by extending the Control of Office Employment Act 1965 to the Birmingham conurbation in 1965. Birmingham's economic landscape had suffered significantly as a result, but since then much of the damage has been undone. The economy of Birmingham also grew relatively slowly between 2002 and 2012, where growth was 31% vs national growth of 44%: the lowest of all the Core Cities. Many of the higher skilled jobs generated have gone to commuters from the surrounding area, and the two parliamentary constituencies with the highest unemployment rates in the UK - Ladywood and Sparkbrook and Small Heath - are both in inner-city Birmingham. According to the 2010 Indices of Multiple Deprivation, Birmingham is the most deprived local authority in England in terms of income and employment. Overall, Birmingham is the 9th most deprived local authority in England when factors such as crime, health and education are included, behind Liverpool and Manchester as the third most deprived Core City. Growth has also placed significant strain on the city's transport infrastructure, with many major roads and the central New Street railway station operating considerably over capacity during peak periods.

Below is a collection of economic indices featuring Birmingham. It is important to remember that while useful, surveys and indicators have limitations, and are at times subjective and incomplete. For example, no complete list of factors affecting quality of life can be created, and the way people weight these factors differs.

Cushman & Wakefield European Cities Monitor (2010) - A survey based on the views of 500 European businesses of Europe's leading business cities. 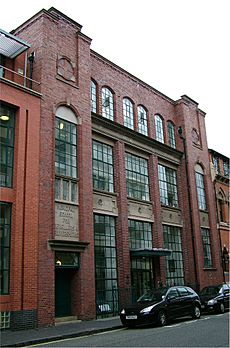 The Municipal School for Jewellers and Silversmiths in the Jewellery Quarter.

The Jewellery Quarter is the largest concentration of dedicated jewellers in Europe.

From manufacturing to service and research

As with most of the British economy, manufacturing in Birmingham has declined in importance since the 1970s, and it now employs a minority of the workforce. In recent years Birmingham's economy has diversified into service industries, retailing and tourism, which are now the main employers in the city.

Birmingham is home to one of the largest shopping centres in the UK, the Bullring.

The city centre currently has four major shopping centres: The Bullring, The Mailbox, The Pavilions and The Pallasades, as well as a number of smaller arcades and precincts and four department stores: Selfridges, Debenhams, House of Fraser and Harvey Nichols; with John Lewis opening its biggest store outside London in the city's New Street station development in 2015.

The city's designer and high end fashion stores are mostly situated in the up-market Mailbox shopping centre, around the Colmore Row financial district, although the Bullring has seen an influx of designer brands such as Hugo Boss, Thomas Sabo, Radley and Armani Exchange.

With major facilities such as the International Convention Centre, the National Exhibition Centre and the Symphony Hall the Birmingham area accounts for 42% of the UK conference and exhibition trade. The city's sporting and cultural venues attract large numbers of visitors.

Birmingham has a large incineration plant, the Tyseley Energy from Waste Plant which produces electricity for the National Grid through the process of burning waste. It was built in 1996 by Veolia.

Famous brands from the "city of a thousand trades" include Bird's Custard, Typhoo Tea, the Birmingham Wire Gauge, Brylcreem, Chad Valley Toys, BSA, Bakelite, Cadburys chocolate, HP Sauce, The Elite Performance Sports Company (Epsc) and the MG Rover Group; although no Rover cars are set to be produced in the future, with Nanjing Automobile Group to focus on the MG cars.

All content from Kiddle encyclopedia articles (including the article images and facts) can be freely used under Attribution-ShareAlike license, unless stated otherwise. Cite this article:
Economy of Birmingham Facts for Kids. Kiddle Encyclopedia.