Edgmont Township is a township in Delaware County, Pennsylvania, United States. Edgmont contains the unincorporated community of Gradyville. The population was 3,987 at the 2010 census.

Edgmont Township, otherwise known by the post office name of "Edgemont" (ZIP code 19028) is a semi-rural suburban area in western Delaware County. It was one of the first townships in Pennsylvania, founded in the late 1680s. Today, Edgmont is home to a rather wide socioeconomic range. Along the rural area along Valley Road are many high-income neighborhoods such as Allee, Okehocking Hills, and Fiveormore. On Delchester Road is the rather posh new neighborhood known as Somerhill. On the major north-south thoroughfare through Edgmont, Providence Road, several upscale single family homes on large lots predominate as well as other high-income neighborhoods such as Springton Chase and Runnymeade Farms. There is also a retirement home known as White Horse Village. Within Edgmont lies a very tiny village that is not incorporated known as Gradyville (19039). It consists mainly of a post office, a gas station, a flower shop, an antique shop, one or two houses, and an English-language Orthodox church. Though Edgmont has its own post office as mentioned previously, most of the area is served by the Newtown Square post office (19073), the Media post office (19063), or the Glen Mills post office as it delivers mail directly to residences.

Edgmont Township lies northwest of the center of Delaware County, with its northern border forming the Chester County line. According to the United States Census Bureau, the township has a total area of 9.73 square miles (25.20 km2), of which 9.71 square miles (25.14 km2) is land and 0.02 square miles (0.06 km2), or 0.24%, is water. Crum Creek forms the eastern border of the township, and Ridley Creek flows roughly parallel to it 1 mile (1.6 km) to the west.

Major routes through and around Edgmont include Pennsylvania Route 3 (West Chester Pike) and Pennsylvania Route 352 (Middletown Road). Edgmont Township is bordered by the townships of Middletown, Upper Providence, Newtown, and Thornbury in Delaware County, and Willistown in Chester County. The single largest geographic feature of the township is Ridley Creek State Park, comprising 2,600 acres (11 km2) in the eastern part of the township. It is a popular destination for a full range of recreational activities, and it is home to the Colonial Pennsylvania Plantation, a colonial farm park staffed from late spring through early fall.

Edgmont Township lies within the Rose Tree Media School District. Public school students living within township boundaries attend either Glenwood Elementary School or Rose Tree Elementary School for grades K-5, depending on where they live. However, it was announced in 2021 that a new elementary school will be built in Edgmont Township, with construction scheduled to begin in the spring of 2022. Springton Lake Middle School serves students in grades 6–8, and Penncrest High School serves students in grades 9-12. 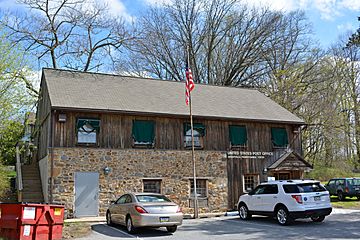 All content from Kiddle encyclopedia articles (including the article images and facts) can be freely used under Attribution-ShareAlike license, unless stated otherwise. Cite this article:
Edgmont Township, Delaware County, Pennsylvania Facts for Kids. Kiddle Encyclopedia.