Edith Dircksey Cowan OBE (née Brown; 2 August 1861 – 9 June 1932) was an Australian social reformer who worked for the rights and welfare of women and children. She is best known as the first Australian woman to serve as a member of parliament. Cowan has featured on the reverse of Australia's 50-dollar note since 1995.

Cowan was born on a sheep station near Geraldton, Western Australia. She was the granddaughter of two of the colony's early settlers, Thomas Brown and John Wittenoom. Cowan's mother died when she was seven, and she was subsequently sent to boarding school in Perth. At the age of 14, her father, Kenneth Brown, was executed for the murder of her stepmother, making her an orphan. She subsequently lived with her grandmother in Guildford, Western Australia until her marriage at the age of 18. She and her husband would have four children together, splitting their time between homes in West Perth and Cottesloe.

In 1894, Cowan was one of the founders of the Karrakatta Club, the first women's social club in Australia. She became prominent in the women's suffrage movement, which saw women in Western Australia granted the right to vote in 1899. Cowan was also a leading advocate for public education and the rights of children (particularly those born to single mothers). She was one of the first women to serve on a local board of education, and in 1906 helped to found the Children's Protection Society, whose lobbying resulted in the creation of the Children's Court the following year. Cowan was a co-founder of the Women's Service Guild in 1909, and in 1911 helped establish a state branch of the National Council of Women.

Cowan was a key figure in the creation of the King Edward Memorial Hospital for Women, and became a member of its advisory board when it opened in 1916. She was made a magistrate in 1915 and a justice of the peace in 1920. In 1921, Cowan was elected to the Legislative Assembly of Western Australia as a member of the Nationalist Party, becoming Australia's first female parliamentarian. She was defeated after just a single term, but maintained a high profile during her tenure and managed to secure the passage of several of her private member's bills. 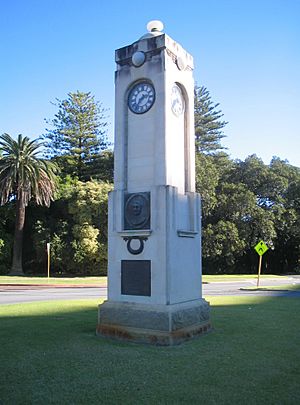 Edith Cowan's portrait appears on the back of Australia's fifty dollar note.

Two years after her death, the Edith Cowan Memorial Clock was unveiled at the entrance to Perth's Kings Park. Believed to be the first civic monument to an Australian woman, it was built in the face of persistent opposition which has been characterised as "representative of a gender bias operating at the time".

Her portrait was featured on an Australian postage stamp in 1975, as part of a six-part "Australian Women" series. During the WAY 1979 sesquicentennial celebrations, a plaque was laid in St Georges Terrace in her honour.

In 1984, the federal Division of Cowan was created and named after her, and in January 1991 the Western Australian College of Advanced Education was renamed Edith Cowan University (ECU).

Her portrait appears on the Australian fifty dollar note, a polymer banknote that was first issued in October 1995. In 2019 the release of the latest $50 note caused a sensation when it was discovered that the word 'responsibility' in Edith Cowan's speech was incorrectly spelt, missing the last 'i'. She is also commemorated in the naming of Edith Cowan University and the federal Division of Cowan, and by the Edith Dircksey Cowan Memorial in Kings Park. In 1996, a plaque honouring her was placed in St George's Cathedral, Perth. There are references to her in the Centenary of Western Australian Women's Suffrage Memorial in Kings Park, and in a tapestry that was hung in King Edward Memorial Hospital in 2000 to honour women involved in the hospital.

In 1991, Edith Cowan University purchased the house at which Edith Cowan, her husband and family had resided at 71 Malcolm Street. They resided in the house from 1919 for approximately 20 years. The house was reconstructed on the university's Joondalup Campus with the assistance of the West Coast College of TAFE. The reconstructed house opened in 1997 and is Building 20 on the university's Joondalup Campus and currently plays host to the Peter Cowan Writer's Centre.

Edith Cowan was added to the Victorian Honour Roll of Women in 2001.

All content from Kiddle encyclopedia articles (including the article images and facts) can be freely used under Attribution-ShareAlike license, unless stated otherwise. Cite this article:
Edith Cowan Facts for Kids. Kiddle Encyclopedia.