Kids Encyclopedia Facts
This page is about a suburb of Perth, Western Australia. For the local government area, see City of Subiaco.

Subiaco (known colloquially as Subi) is an inner-western suburb of Perth, the capital of Western Australia. It is approximately 3 kilometres (1.9 mi) west of Perth's central business district, in the City of Subiaco local government area. Historically a working-class suburb containing a mixture of industrial and commercial land uses, since the 1990s the area has been one of Australia's most celebrated urban redevelopment projects. It remains a predominantly low-rise, urban village neighbourhood centred around Subiaco train station and Rokeby Road.

The suburb has three schools: Subiaco Primary School, Perth Modern School, which is the state's only fully academically selective public school, and Bob Hawke College. Landmarks in Subiaco include Subiaco Oval, which formerly was the largest stadium in Western Australia, King Edward Memorial Hospital for Women, and Subiaco railway station.

Prior to European settlement the area was home to the Noongar Indigenous people.

The area was settled in 1851 by Italian Benedictine monks. The monks named the area after Subiaco in Italy, the location where Benedict of Nursia, the founder of the Order of Saint Benedict, had begun his work.

Landmarks of the suburb include Subiaco Oval aka Domain Stadium, Mueller Park, the Regal Theatre, the Subiaco Hotel, the Victorian terraces on Catherine Street and the Subiaco Arts Centre. 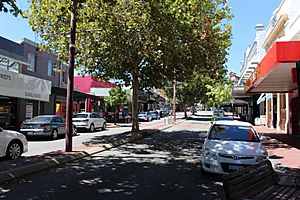 Rokeby Road, a major road which runs through the suburb, features many shops and cafes.

The main street of Subiaco is Rokeby Road, which was named after General Henry Montagu, 6th Baron Rokeby, who was commander of the 1st Infantry Division during the Crimean War. Another important commercial road is Hay Street.

On the corner of Rokeby and Hamersley Roads is a clock tower war memorial, built in 1923 to commemorate soldiers from the district who died in World War I. The names of those who died in later conflicts have also been added.

Each year, the City of Subiaco supports a boutique street festival where Rokeby Road is closed off from traffic between Barker Road and Hay Street. It is commonly referred to as the 'Subiaco Street Party' and is a free community event that promotes live music, street food, markets and family entertainment. 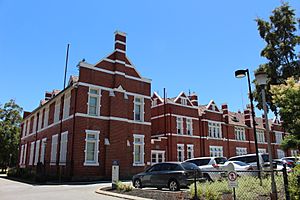 Along the south eastern border of Subiaco is Thomas Street, which is a six-lane dual carriageway. To the south, Thomas Street leads to the Queen Elizabeth II Medical Centre (QEII Medical Centre), the University of Western Australia (UWA), and Stirling Highway. To the north, this continues as Loftus Street, which has an interchange with the Mitchell Freeway. Along the western edge is Railway Road, which travels along the southern side of the railway, leading to Claremont. This road is a four-land single carriageway.

East–west through Subiaco, Roberts Road and Hay Street form a pair of one way roads travelling opposite directions. To the east of Subiaco, they lead to the Perth CBD. To the west, Roberts Road intersects with Hay Street, which becomes a two way road. Continuing west on Hay Street leads to Floreat, City Beach and West Coast Highway. On the northern edge, there is Salvado Road and Railway Parade, the latter of which travels along the northern side of the railway line. Railway Parade continues east of Thomas Street as Roe Street, which leads to the Perth CBD and Northbridge. Bagot Road continues east of Thomas Street as Kings Park Road, which also leads to the Perth CBD. On the southern edge, there is Nicholson Road, which bridges across the railway line.

North–south through Subiaco, Rokeby Road is a main road. This links between Thomas Street to the south, to Roberts Road to the north. The other north–south main road is Haydn Bunton Drive and Townshend Road. The former road is named after former Subiaco Football Club players Haydn Bunton Sr. and Haydn Bunton Jr., and passes on the west side of Subiaco Oval and over the railway line to Railway Parade. 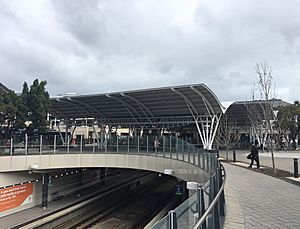 Public transport in Perth is all under the Transperth brand. Train services are operated by Transperth Train Operations, a division of the Public Transport Authority. Bus services in Perth are contracted out to private companies. Subiaco is in the Claremont contract area, which is being operated by Swan Transit.

All content from Kiddle encyclopedia articles (including the article images and facts) can be freely used under Attribution-ShareAlike license, unless stated otherwise. Cite this article:
Subiaco, Western Australia Facts for Kids. Kiddle Encyclopedia.