Elberton is the largest city in Elbert County, Georgia, United States. The population was 4,653 at the 2010 census. The city is the county seat of Elbert County, and serves as a hub for industry and small business in Northeast Georgia.

Settled in the 1780s, Elbert was designated seat of the newly formed Elbert County in 1790. It was incorporated as a town in 1803 and as a city in 1896. Like Elbert County, Elberton is named for Samuel Elbert.

Elberton is known as the "Granite Capital of the World."

There were 1,985 households out of which 29.1% had children under the age of 18 living with them, 37.9% were married couples living together, 21.8% had a female householder with no husband present, and 35.8% were non-families. 32.9% of all households were made up of individuals and 18.0% had someone living alone who was 65 years of age or older. The average household size was 2.35 and the average family size was 2.96. 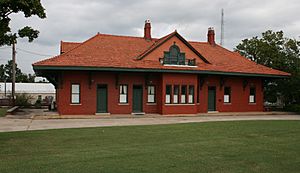 Georgia State Routes 17, 72, 77 and 77 Connector pass through the city. Heard, Oliver, Church, and McIntosh streets are the primary thoroughfares downtown while College Avenue and Elbert Street bypass the downtown area and serve as the major routes through the city.

Plans for the proposed Interstate 3 have the highway passing through Elberton.

Elberton and Elbert County are served locally by the Elbert County-Patz Field Airport, located just east of the city on State Route 72.

Regional air transportation is available in the nearby cities of Athens, Georgia, and Anderson, South Carolina.

Elberton has a sister city, as designated by Sister Cities International, Inc. (SCI):

The program sends and receives high school students and chaperones each year. They stay in Elbert County with host families for 2 weeks. Many long term relationships have formed between the two cities. The thriving program will celebrate its 35th year in 2017.

All content from Kiddle encyclopedia articles (including the article images and facts) can be freely used under Attribution-ShareAlike license, unless stated otherwise. Cite this article:
Elberton, Georgia Facts for Kids. Kiddle Encyclopedia.