Elisabeth Therese of Lorraine (Élisabeth Thérèse de Lorraine; 15 October 1711 – 3 July 1741) was born a Princess of Lorraine and a Queen of Sardinia as wife King Charles Emmanuel III of Sardinia. She was a younger sister of Francis Stephan, Duke of Lorraine.

Élisabeth Thérèse of Lorraine was born at the Château de Lunéville and was the ninth of eleven children of Leopold Joseph of Lorraine and his wife Élisabeth Charlotte d'Orléans. Her mother was a niece of Louis XIV.

Her mother wanted her to marry her cousin Louis d'Orléans, Duke of Orléans but the Duke of Orléans refused. As a result Elisabeth Therese was created the coadjutrice of Remiremont Abbey in October 1734.

In 1736 her brother the Duke of Lorraine married the Maria Theresa of Austria, daughter of Charles VI, Holy Roman Emperor. The already twice widowed Charles Emmanuel III of Sardinia asked for her hand in late 1736 and the marriage went ahead.

The couple married in person on 1 April 1737. Charles Emmanuel III was her first cousin, his mother being Anne Marie d'Orléans – a half sister of her mother Élisabeth Charlotte. The marriage produced three children, only one of whom survived infancy.

Élisabeth Thérèse died at the Palace of Venaria aged 29, having fallen ill with a fever after childbirth. She was buried in the Cathedral of Saint Giovanni Battista in Turin. She was moved to the Royal Basilica of Superga in 1786 by her stepson Victor Amadeus III. 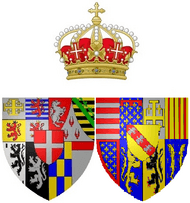 Arms as queen of Sardinia

All content from Kiddle encyclopedia articles (including the article images and facts) can be freely used under Attribution-ShareAlike license, unless stated otherwise. Cite this article:
Elisabeth Therese of Lorraine Facts for Kids. Kiddle Encyclopedia.