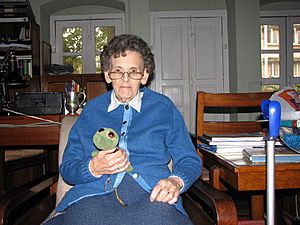 Elizabeth Hawley (November 9, 1923 – January 26, 2018) was an American journalist and chronicler of Himalayan expeditions. Hawley was born in Chicago, Illinois.

She was studied at the University of Michigan. She moved to Nepal after giving up her job as a researcher for Fortune magazine in New York and visiting Kathmandu on a round-the-world trip.

She found work with the Reuters news agency covering mountaineering news, including the 1963 American expedition that was the first from the United States to traverse Mount Everest.

All content from Kiddle encyclopedia articles (including the article images and facts) can be freely used under Attribution-ShareAlike license, unless stated otherwise. Cite this article:
Elizabeth Hawley Facts for Kids. Kiddle Encyclopedia.