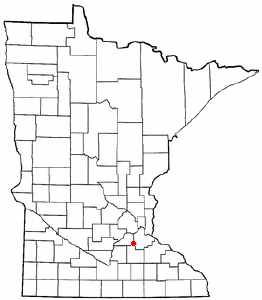 Elko New Market is a city in Scott County in the State of Minnesota resulting from a merger of bordering cities Elko and New Market in 2006. The population was 4,110 at the 2010 census.

Served by Interstate 35 and Scott County Road 2, the city contains one public school Eagle View Elementary, and is primarily known for Elko Speedway. The New Market Hotel and Store is on the National Register of Historic Places. The city contains a marker for the Big Woods of south–central Minnesota.

Elko was initially a railway village in 1858. New Market was named for the town near Cambridge, England though it was first named Jackson until its establishment about the same time. Both Elko and New Market were common town names of the era according to the Minnesota Historical Society.

On March 21, 2006, both the cities of Elko and New Market passed a referendum to merge. The new city was named Elko New Market with the merger taking effect on January 1, 2007.

According to the United States Census Bureau, the city has a total area of 3.36 square miles (8.70 km2), all land.

There were 1,259 households, of which 60.4% had children under the age of 18 living with them, 73.9% were married couples living together, 6.3% had a female householder with no husband present, 4.3% had a male householder with no wife present, and 15.5% were non-families. 9.5% of all households were made up of individuals, and 0.9% had someone living alone who was 65 years of age or older. The average household size was 3.26 and the average family size was 3.53.

All content from Kiddle encyclopedia articles (including the article images and facts) can be freely used under Attribution-ShareAlike license, unless stated otherwise. Cite this article:
Elko New Market, Minnesota Facts for Kids. Kiddle Encyclopedia.