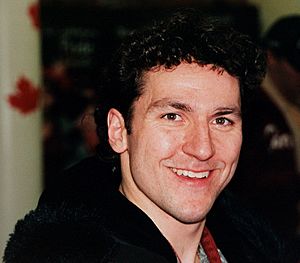 Stojko was named after Elvis Presley, and sometimes skates to Presley's music. He grew up in Richmond Hill, Ontario. He started skating when he was four years old. He also became a black belt in karate (which has influenced some of his skating). Stojko was the first person to do a quadruple-triple jump combination. He became known for his athletic ability.

Today he is a professional skater, and also competes in karate.

All content from Kiddle encyclopedia articles (including the article images and facts) can be freely used under Attribution-ShareAlike license, unless stated otherwise. Cite this article:
Elvis Stojko Facts for Kids. Kiddle Encyclopedia.