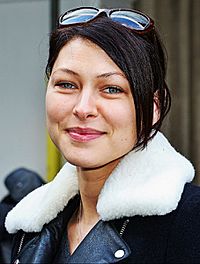 Emma Louise Willis (née Griffiths; born 18 March 1976) is an English television presenter, radio personality, and former model. She was born in Birmingham, England. She is known for her television and radio work with Channel 5, BBC, ITV, and Heart FM.

Willis has presented Big Brother and Celebrity Big Brother (2013–2018), as well as the spin-off series Big Brother's Bit on the Side (2011–2015). She also presented The Voice UK. In 2019, Willis presented the second series of The Circle.

In 2012, she married Matt Willis. They have three children.

All content from Kiddle encyclopedia articles (including the article images and facts) can be freely used under Attribution-ShareAlike license, unless stated otherwise. Cite this article:
Emma Willis Facts for Kids. Kiddle Encyclopedia.