Ena Lake is the name of a lake and an adjacent unincorporated area and railway point in Unorganized Kenora District in northwestern Ontario, Canada, about 23 kilometres (14 mi) north of the city of Kenora. Formerly a stop on the Canadian National Railway, it is now a small cottage community of approximately 50 seasonal residents and 11 year round residents.

Ena Lake can be accessed from Kenora via Ontario Highway 658, then Ena Lake road. It is on the Canadian National Railway transcontinental main line, between Minaki to the west and Redditt to the east, has a passing track, and is passed but not served by Via Rail transcontinental Canadian trains. It may also be reached by boat via the Winnipeg River and MacFarlane River, from which a short portage leads to the lake. The historical and public portage route is tightly along the north side of the rapids/falls, starting right next to the dam at the out flow of Ena Lake, it crosses the road, where a sign marks the portage route. Boat trips to Redditt via the MacFarlane River and Corn Lake are also possible.

In the spring great flocks of white pelicans fish for spawning fish in the rapids below the falls at the outflow from the lake. Flocks of up to 200 have been observed. The tributary Ena Brook (called Octopus Creek on topographical maps) and Corn Creek (called McFarlane River on topographical maps) have a boreal floating bog/wetland.

Ena Lake is a popular starting point for canoe trips to Vermillion Lake, Octopus Lake, and beyond. 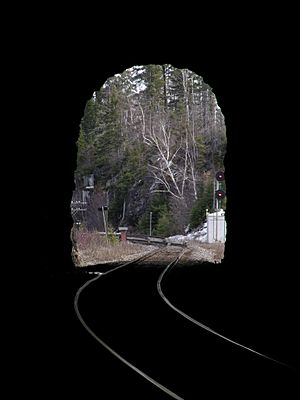 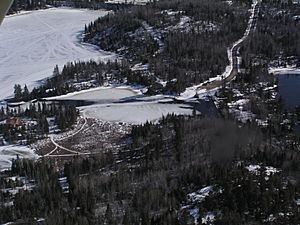 All content from Kiddle encyclopedia articles (including the article images and facts) can be freely used under Attribution-ShareAlike license, unless stated otherwise. Cite this article:
Ena Lake, Ontario Facts for Kids. Kiddle Encyclopedia.