Enterprise is famous for the Boll Weevil Monument, a large monument of a woman holding a boll weevil, which is located in the middle of Main Street. The city erected the statue because the destruction of the cotton crop by the boll weevil had led to agricultural diversity, starting with peanuts and more prosperity than had ever come from cotton alone. It is said to be the only statue to an insect pest in the world. Enterprise is right outside of Fort Rucker, an Army base which is the home of Army Aviation.

Founding of the Boll Weevil Monument 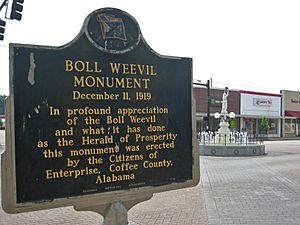 The founder of Enterprise, John Henry Carmichael, first settled there in 1881. Carmichael opened a store, which attracted more settlers to the area, and by the next year a post office was relocated from the settlement of Drake Eye to the north to Enterprise. In 1896, with 250 people having settled there, the city of Enterprise incorporated. Soon afterward, the Alabama Midland Railway came to Enterprise, bringing with it opportunities for commerce and growth. By 1906, ten years after the city incorporated, its population had grown to 3,750.

The way of life in Enterprise came under threat in 1915. An infestation of boll weevils had found its way into the region's cotton crops, resulting in the destruction of most of the cotton in Coffee County. Facing economic ruin, the nearly bankrupt area farmers were forced to diversify, planting peanuts and other crops in an effort to lessen the damage and recoup some of the losses inflicted upon them by the invading insect.

Two years later, Coffee County was the leading producer of peanuts in the United States. Enterprise was able not only to stave off disaster, but its economy was renewed by the thriving new crop base. In appreciation, the people of Enterprise erected a monument in the city center to what the monument describes as their "herald of prosperity"; the boll weevil. The Boll Weevil Monument was dedicated on December 11, 1919, as a reminder of how the city adjusted in the face of adversity. It is the only monument to an agricultural pest in the world. 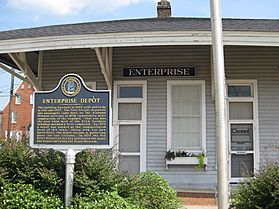 In the early afternoon of March 1, 2007, Enterprise was hit by a devastating tornado (rated EF4) during the February–March 2007 Tornado Outbreak. The tornado caused nine deaths, injured over 121 others, and left severe damage in the city estimated at nearly $307,000,000, becoming the worst disaster in Enterprise history. The worst damage occurred at Enterprise High School, where eight students died after one hallway was almost completely destroyed. A quarter-mile (400 m) wide swath through the downtown area was devastated, with at least 370 houses damaged or destroyed. The National Guard was called into the city, and a dusk-to-dawn curfew was implemented immediately after the disaster. President Bush, who arrived the morning of March 3, declared the county a disaster area. An AmeriCorps team was sent to the city to help organize and participate in disaster relief.

As of June 2008 the Hillcrest Elementary School which was destroyed during the tornado was being rebuilt at the site of the former Enterprise High School. The high school was to be relocated to the west end of the Boll Weevil Circle. It was due to be rebuilt by the 2010–11 school year at a cost of over $80,000,000. Until then the students were required to go to school at the local community college where they built trailers to add classrooms. The high school was rebuilt and reopened on August 23, 2010. 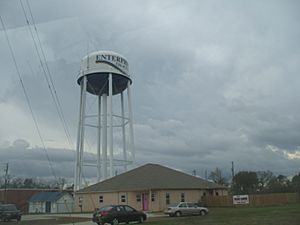 One of the water towers of Enterprise showing the city motto

There were 10,513 households out of which 32.2% had children under the age of 18 living with them, 50.3% were married couples living together, 13.9% had a female householder with no husband present, and 31.6% were non-families. 25.6% of all households were made up of individuals and 8.5% had someone living alone who was 65 years of age or older. The average household size was 2.50 and the average family size was 3.00.

There were 8,533 households out of which 33.1% had children under the age of 18 living with them, 53.6% were married couples living together, 13.3% had a female householder with no husband present, and 30.0% were non-families. 25.7% of all households were made up of individuals and 9.5% had someone living alone who was 65 years of age or older. The average household size was 2.45 and the average family size was 2.95.

"Force Majeure", a composition for symphonic band by Rob Grice (published in 2009 by Birch Island Music Press) is dedicated to Enterprise High School "03-01-2007 – We Shall Never Forget". The piece was featured by the North Star Wind Symphony in concert on March 11, 2010, at the Lone Star College-North Harris campus.

The song "Your Guardian Angel" by The Red Jumpsuit Apparatus is dedicated to the eight students who lost their lives on 03-01-2007 when a tornado half-a-mile wide hit the high school. The twister claimed 8 lives and destroyed Enterprise High School. The song "Held In His Love" by The Springs (band) was written by Stewart Halcomb, a student inside Enterprise High School (Alabama) on March 1, 2007 and dedicated to the 8 friends he lost that day. 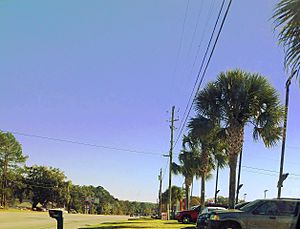 The climate in this area is characterized by hot, humid summers and generally mild winters. According to the Köppen Climate Classification system, Enterprise has a humid subtropical climate, abbreviated "Cfa" on climate maps. The temperatures are moderated by its proximity to the Gulf Coast, and is part of the Wiregrass Region of Southern Alabama, Georgia, and Florida.

It is located in USDA Plant Hardiness Zone 8B with an average minimum temperature of 15 to 20 (F). As a result of its mild to warm climate, palm trees such as Butia capitata, Sabal palmetto, Phoenix canariensis, Cycas revoluta, and Trachycarpus fortunei are widely grown throughout the city.

All content from Kiddle encyclopedia articles (including the article images and facts) can be freely used under Attribution-ShareAlike license, unless stated otherwise. Cite this article:
Enterprise, Alabama Facts for Kids. Kiddle Encyclopedia.