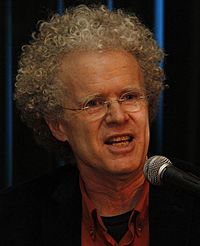 Erik Olin Wright (February 9, 1947 – January 23, 2019) was an American analytical Marxist sociologist. He focused in social stratification and alternative futures to capitalism. He worked at the University of Wisconsin-Madison.

He was known for his classical Marxism views in his breakdown of the working class into subgroups of diversely. Wright introduced novel concepts to adapt to this change of perspective including deep democracy and interstitial revolution. He was born in Berkeley, California.

Wright studied at Harvard University, University of California, Berkeley and at Oxford College. In 2012, Wright was elected President of the American Sociological Association.

Wright died on January 23, 2019, from acute myeloid leukemia at a hospital in Milwaukee, Wisconsin, aged 71.

All content from Kiddle encyclopedia articles (including the article images and facts) can be freely used under Attribution-ShareAlike license, unless stated otherwise. Cite this article:
Erik Olin Wright Facts for Kids. Kiddle Encyclopedia.