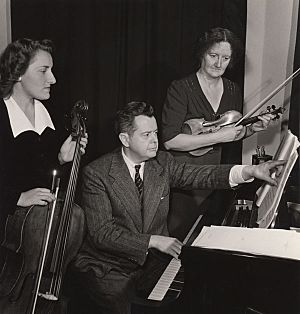 MacMillan's father was a Scottish Presbyterian minister and musician. He was a child prodigy. He gave his first organ recital in Massey Hall at the age of ten. After studying in Britain and gaining the ARCO and FRCO diplomas at the Royal College of Organists, he studied modern history at the University of Toronto from 1911 to 1914.

In 1914 he went to Europe. He wanted to study at the Paris Conservatoire but this was closed because of the political situation. He went on to Germany to attend the Bayreuth Festival, but World War I started and he was taken prisoner and kept at the Ruhleben civilian detention camp near Berlin. He helped the other people who were prisoners in the camp to put on concerts. He gave talks about classical music and conducted a performance of the Gilbert and Sullivan opera Mikado as well as a pantomime version of Cinderella. This helped him to get experience in conducting. He also took part in the drama productions. He studied hard and was given a BA degree from the University of Toronto (1915) and a D Mus from the University of Oxford (1918), although he was locked up in the camp all this time.

After the war he returned to Canada where he gave organ recitals and lectured about his experiences in Ruhleben. From 1926 to 1942 he was principal of the Toronto Conservatory of Music, later to become the Royal Conservatory of Music. He was the conductor of the Toronto Symphony Orchestra between 1931 and 1956. He did a lot for music in Canada,and he was knighted in 1935 by King George V. In 1969 he was made a Companion of the Order of Canada. He died in Toronto in 1973.

When he conducted he often took the music very slowly. This gave him the nickname "Lord Largo" ("Largo" means "slow and broad" in music). He had an amazing musical memory and he could improvise very well. MacMillan helped to record and preserve the traditional songs and music of Canada's aboriginal or First Nations people. He had an important influence on almost every part of Canadian musical life.

All content from Kiddle encyclopedia articles (including the article images and facts) can be freely used under Attribution-ShareAlike license, unless stated otherwise. Cite this article:
Ernest MacMillan Facts for Kids. Kiddle Encyclopedia.