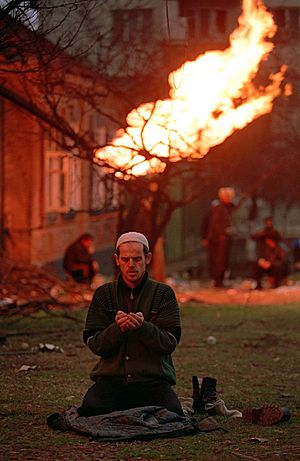 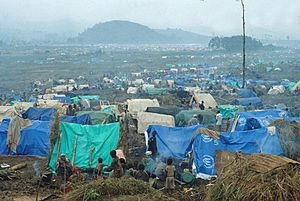 A refugee camp for displaced Tutsi in Zaire following the Rwandan Genocide of 1994.

An ethnic conflict (or ethnic war) is a conflict where different ethnic groups fight each other. It is different from a civil war, where a single nation or ethnic group is fighting among itself.

Examples of ethnic wars since the 1990s were typically caused by secessionist movements leading to the breakup of multi-ethnic states along ethnic lines: the Yugoslav Wars, the First Chechen War, the Nagorno-Karabakh War, the Rwandan Civil War and the War in Darfur, among others

Academic explanations of ethnic conflict generally fall into one of three schools of thought: primordialist, instrumentalist or constructivist. Intellectual debate has also focused around the issue of whether ethnic conflict has become more common since the end of the Cold War, and on finding ways of managing conflicts, through instruments such as consociationalism and federalisation.

All content from Kiddle encyclopedia articles (including the article images and facts) can be freely used under Attribution-ShareAlike license, unless stated otherwise. Cite this article:
Ethnic conflict Facts for Kids. Kiddle Encyclopedia.