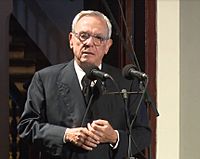 Eusebio Leal Spengler (11 September 1942 – 31 July 2020) was a Cuban-Mexican historian. He was born in Havana. He was director of the restoration program of Old Havana and its historical center, UNESCO World Heritage Site and was an honorary member of the National Assembly of People's Power. He was a well known historian of the city of Havana.

All content from Kiddle encyclopedia articles (including the article images and facts) can be freely used under Attribution-ShareAlike license, unless stated otherwise. Cite this article:
Eusebio Leal Facts for Kids. Kiddle Encyclopedia.