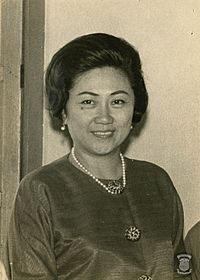 Eva Estrada Kalaw (June 16, 1920 – May 25, 2017) was a Filipino politician and professor. She served as a Senator in the Senate of the Philippines from 1965 through 1972. She was elected senator in 1965 under the Nacionalista Party. She was serving in Senate during the presidency of Ferdinand Marcos, she was part of a major transformation in Philippine domestic and foreign policies.

Kalaw was a candidate for President of the Philippines in 1986 and again in 1992.

Kalaw was born in Murcia, Tarlac, Philippine Islands. She studied at the University of the Philippines. Kalaw died on May 25, 2017 at a hospital in Manila at the age of 96.

All content from Kiddle encyclopedia articles (including the article images and facts) can be freely used under Attribution-ShareAlike license, unless stated otherwise. Cite this article:
Eva Estrada Kalaw Facts for Kids. Kiddle Encyclopedia.