Eveleth is a city in Saint Louis County, Minnesota, United States. The population was 3,718 at the 2010 census.

The city briefly entered the national news in October 2002 when U.S. Senator Paul Wellstone, along with seven others, died in a plane crash, two miles away from the airport of Eveleth. It was also the site of the conflict that resulted in the court case Jenson v. Eveleth Taconite Co., and the film North Country, which was based on it. Eveleth is home of the United States Hockey Hall of Fame.

Eveleth is part of the Quad Cities of Virginia, Gilbert, and Mountain Iron.

The Village of Eveleth was platted on April 22, 1893, and founded in 1894, located approximately 1 mile (1.6 km) southwest of the present location, on land then included in the Adams-Spruce Mine (Douglas Avenue between Jones and Monroe Streets). The community was named after Erwin Eveleth, a prominent employee of a timber company in the area. In 1895, iron ore was discovered beneath the village site and a post office was established. In 1900, the village was moved to its present location. The village was incorporated as City of Eveleth in 1913. When the city expanded, it annexed portions of Fayal Township, including the former unincorporated communities of Alice Mine Station (in the Alice Location south of downtown) and Fayal. With further expansion, Eveleth annexed the unincorporated community of Genoa to its east. Eveleth first established its post office on February 9, 1895 with P. Ellard Dowling to act as commander-in-chief. Eveleth would also have its first paper called The Eveleth Star the same year.

There were 1,682 households of which 28.5% had children under the age of 18 living with them, 36.0% were married couples living together, 13.1% had a female householder with no husband present, 5.6% had a male householder with no wife present, and 45.2% were non-families. 38.9% of all households were made up of individuals and 13.2% had someone living alone who was 65 years of age or older. The average household size was 2.14 and the average family size was 2.83.

There were 1,717 households out of which 26.8% had children under the age of 18 living with them, 40.4% were married couples living together, 11.8% had a female householder with no husband present, and 43.4% were non-families. 38.1% of all households were made up of individuals and 16.2% had someone living alone who was 65 years of age or older. The average household size was 2.14 and the average family size was 2.80.

Eveleth at one time was one of a handful of U.S. cities with side-by-side water towers labeled "HOT" and "COLD". Eveleth no longer has two such water towers.

An airplane carrying U.S. Senator Paul Wellstone and members of his family crashed into a dense forest about two miles from the Eveleth Airport on October 25, 2002. Senator Wellstone and seven others died in the airplane crash. The crash occurred less than two weeks before Sen. Wellstone was to face re-election to the U.S. Senate. 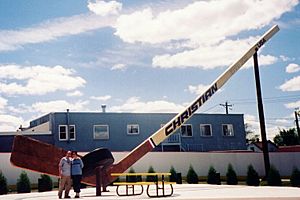 Frank Brimsek was born here in 1913. He was a Hockey Hall of Fame goalie. Also born here were John Mariucci (in 1916) and John Mayasich (in 1933). More recently, Eveleth produced Mark Pavelich, who played on the 1980 U.S. Olympic team that memorably defeated the Soviet Union (depicted in the movie Miracle about the Miracle on Ice) and Finland en route to a gold medal. Eveleth also has the" world's largest authentic hockey stick", standing at 107 feet and weighing 3 tons.

All content from Kiddle encyclopedia articles (including the article images and facts) can be freely used under Attribution-ShareAlike license, unless stated otherwise. Cite this article:
Eveleth, Minnesota Facts for Kids. Kiddle Encyclopedia.