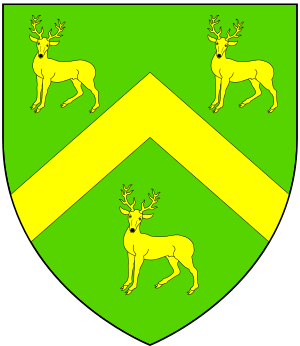 Arms of Robinson of Newby: Vert, a chevron between three bucks at gaze or 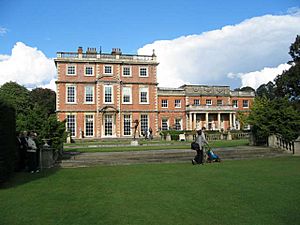 A member of the rural landowning aristocracy, Robinson entered politics through family connections. In the House of Commons he rose through junior ministerial ranks, achieving cabinet office in 1818 as President of the Board of Trade. In 1823 he was appointed Chancellor of the Exchequer, a post he held for four years. In 1827 he was raised to the peerage, and in the House of Lords was Leader of the House and Secretary of State for War and the Colonies.

When the Prime Minister, George Canning, died in 1827 Goderich succeeded him, but was unable to hold together Canning's fragile coalition of moderate Tories and Whigs. He resigned after 144 days in office, the shortest in history for any British prime minister who did not die in office.

After leaving the premiership Goderich served in the cabinets of two of his successors, the Earl Grey and Sir Robert Peel.

All content from Kiddle encyclopedia articles (including the article images and facts) can be freely used under Attribution-ShareAlike license, unless stated otherwise. Cite this article:
F. J. Robinson, 1st Viscount Goderich Facts for Kids. Kiddle Encyclopedia.