The Falls Road (from Irish túath na bhFál, meaning 'territory of the enclosures') is the main road through West Belfast, Northern Ireland, running from Divis Street in Belfast City Centre to Andersonstown in the suburbs. The name has been synonymous for at least a century and a half with the Catholic community in the city. The road is usually referred to as the Falls Road, rather than as Falls Road. It is known in Irish as the Bóthar na bhFál and as the Faas Raa in Ulster-Scots. 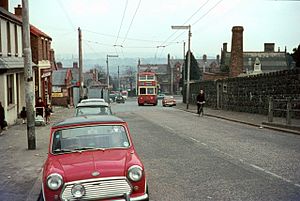 Nearby Whiterock Road in 1968

The Falls Road derives its name from the Irish túath na bhFál, an Irish petty-kingdom whose name means "territory of the enclosures". This territory was roughly the same as that of the ecclesiastical parish of the Shankill, which spanned a large portion of modern-day Belfast.

The Falls Road itself was originally a country lane leading from the city centre but the population of the area expanded rapidly in the 19th century with the construction of several large linen mills. All of these have now closed or have been repurposed. This original area, which was centred on the junction of modern-day Millfield and Hamill Street on what is now Divis Street, was known as Falls and lent its name to the road, which had previously been called "the Pound". The housing in the area developed in the 19th century and was organised in narrow streets of small terraced housing. Many of these streets were named after characters and events in the Crimean War (1853–1856) which was occurring at that time. 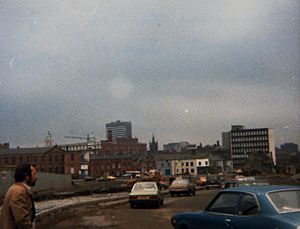 The view from the Falls Road to the city centre, 1981

By the 1960s the buildings in the area had decayed considerably and the Belfast Corporation introduced a major development plan which involved wholescale demolition of much of the area and its replacement with a series of flat complexes. The high point of this redevelopment was Divis Tower, built on top of the historic district formerly known as the Pound Loney.

The Falls Road district can be roughly divided into three sections. The Lower Falls which includes Divis Street starts near the city centre and continues to the junction with the Grosvenor Road. The middle Falls district centres on Beechmount. The Upper Falls starts about the Donegall Road and continues into Andersonstown. 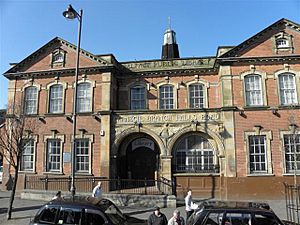 Since the 1960s there has been a substantial revival of traditional culture in terms of Irish language, dancing and music. These are all showcased during the Féile an Phobail, an annual festival of Irish culture. Cultúrlann McAdam Ó Fiaich, known colloquially as the Cultúrlann, is an Irish language and arts centre based on Falls Road. The centre also houses Irish language bookshop An Ceathrú Póilí. One of three Carnegie libraries built in Belfast is situated on Falls Road. It opened on 1 January 1908 and is the last Carnegie library in Belfast still functioning as a library.

There are several large hospitals in the area including the Royal Victoria Hospital, the Royal Jubilee Maternity Service, the Royal Belfast Hospital for Sick Children, and the Royal Dental Hospital

The Lower Falls area previously had many linen mills. These have either been demolished or converted for other purposes. One of these is Conway Mill, in Conway Street (named after the Conway family, a noted generous family of the Clonard Area). Originally a flax spinning mill, it now houses a community enterprise of small businesses, art studios, retail space and education floor. 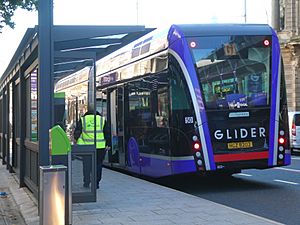 Originally there was a tram service providing public transport on the Falls Road. This was introduced in the late 19th century and replaced by trolleybuses in 1938. There were three routes along the road: 11 for Falls Road-Whiterock Road, 12 for Falls Road-Andersonstown Road and 13 for Falls Road-Glen Road. The 77 route from the Gasworks to the Waterworks ran via Albert Street/Northumberland Street and cut across the Falls Road and the Shankill Road. The trolleybuses were replaced by diesel buses in the 1960s. With the outbreak of the troubles, the bus service was withdrawn. The gap in public transport was replaced by black taxis. Since the troubles ended, the public bus service has been re-introduced and expanded. Metro, a division of Translink now operates the bus service. The Falls Road is designated one of the quality bus corridors (QBCs) within the city with a variety of different routes.

In 2018, the Glider bus service was introduced. It provides a service from Poleglass via the Falls Road-City Centre and Newtownards Road to Dundonald. It was the first cross-city bus service.

All content from Kiddle encyclopedia articles (including the article images and facts) can be freely used under Attribution-ShareAlike license, unless stated otherwise. Cite this article:
Falls Road, Belfast Facts for Kids. Kiddle Encyclopedia.