Fidra (archaically Fidrey or Fetheray) is an uninhabited island in the Firth of Forth, 4 kilometres (2 1⁄2 miles) northwest of North Berwick, on the east coast of Scotland. The island is an RSPB Scotland nature reserve. 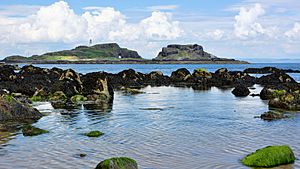 Like the other islands near North Berwick, Fidra is the result of volcanic activity around 335 million years ago. Fidra consists of three sections; a hill at one end with the lighthouse on it; a low-lying section in the middle, effectively an isthmus; and a rocky stack at the other end. 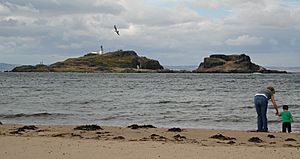 View of Fidra from Yellowcraig

The island's name is believed to be Old Norse in origin, referring to the large number of bird feathers found there. Like the nearby Bass Rock, it has a substantial seabird population, and is now an RSPB reserve. The village of Gullane lies to the south-west, and the nature reserve of Yellowcraig and village of Dirleton, to which parish Fidra belongs, are to the south. Remotely operated cameras on the island send live pictures to the watching visitors at the Scottish Seabird Centre in North Berwick.

Upon the island are ruins of an old chapel, or lazaretto for the sick, which was dedicated in 1165 to St Nicholas. In the 12th-century, the island formed part of the barony of Dirleton, which was granted to the Anglo-Norman John de Vaux by King David I. The de Vaux family built a stronghold, known as Castle Tarbet, on the island, but in 1220, William de Vaux gifted Fidra to the monks of Dryburgh Abbey, in the Borders. His successor built Dirleton Castle, on the mainland, as a replacement dwelling.

The number of breeding puffins on the island has increased recently due to the removal of an introduced plant, tree mallow (Lavatera arborea). It is likely that it was planted by lighthouse keepers for use as toilet paper, and for its medicinal qualities. The shrub was blocking the entrances to the breeding burrows, and in 1996 the number of occupied burrows had fallen to approximately 400. Following clearance by RSPB Scotland staff and volunteers over 1,000 burrows are occupied in 2016.

The lighthouse, which was built in 1885 and automated in 1970, is accessible via a jetty on the east coast of the island. The light flashes 4 times every 30 seconds.

All content from Kiddle encyclopedia articles (including the article images and facts) can be freely used under Attribution-ShareAlike license, unless stated otherwise. Cite this article:
Fidra Facts for Kids. Kiddle Encyclopedia.