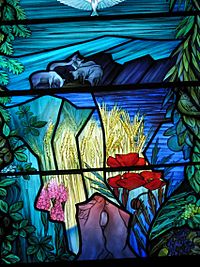 Gullane (possibly from the gd: Gualainn meaning "ridge") is a town on the southern shore of the Firth of Forth in East Lothian on the east coast of Scotland. There has been a church in the village since the ninth century. The ruins of the Old Church of St. Andrew built in the twelfth century can still be seen at the western entrance to the village; the church was abandoned after a series of sandstorms made it unusable, and Dirleton Parish Church took its place. 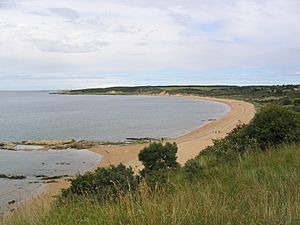 Gullane Bents, the village's award-winning beach, is backed by large sand dunes that in recent years have become rather overgrown by invasive shrubs like sea-buckthorn. Gullane is part of the John Muir Way, a long-distance footpath along the coast between Musselburgh and Dunglass.

The local population includes a higher than average percentage of elderly people, but also attracts young families and commuters for Edinburgh. Urbanisation has led to some recent housing developments being approved on greenbelt land around the village, and Gullane is gaining popularity as a commuter village for nearby Edinburgh (22 miles (35 km) away), despite the poor transport to the village. Amenities include the village hall and a variety of shops. There is a primary school, and local children attend secondary school (5 miles (8 km) away in North Berwick.

Greywalls Hotel was built in 1901 to a design by Sir Edwin Lutyens; the gardens were designed by Gertrude Jekyll.

The Scottish Fire and Rescue Service formerly had their training school based at Gullane (which was relocated to new buildings in Cambuslang in 2013).

Gullane War Memorial was erected in 1914, reflecting both the immediate loss of life to the community, but also the emotional impact. Although not unique in having such an early memorial it is nonetheless unusual. Names were added as the war continued. The monument was designed by Sir Robert Lorimer.

Gullane is the home of Muirfield which has hosted The Open Championship on numerous occasions, most recently in 2013. In addition to Muirfield, Gullane is the site of several other golf courses in the village and surrounding area. At the Gullane Golf Club, three eighteen-hole links courses straddle a large grassed-over volcanic plug, of which a composite course hosted both the Scottish Open and Ladies Scottish Open in 2018. 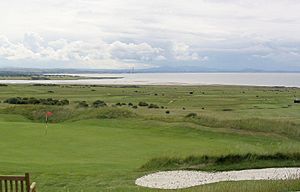 Aberlady Bay and Pentland Hills over the golf courses

From the top of the hill on each course there is a fine view over Aberlady and Aberlady Bay towards Edinburgh and the Forth Bridge as well as the coast of Fife and the Lomond Hills. Internationally acclaimed artist Frank W Wood painted a view of Gullane in 1933.

Jock Wallace took his Rangers teams for pre-season runs up and down the sand dunes at Gullane in the 1970s.

All content from Kiddle encyclopedia articles (including the article images and facts) can be freely used under Attribution-ShareAlike license, unless stated otherwise. Cite this article:
Gullane Facts for Kids. Kiddle Encyclopedia.