Field Brook (also known as Fields Brook) is a tributary of Tunkhannock Creek in Susquehanna County and Wyoming County, in Pennsylvania, in the United States. It is approximately 5.8 miles (9.3 km) long and flows through Lathrop Township in Susquehanna County and Nicholson Township in Wyoming County. The watershed of the stream has an area of 7.41 square miles (19.2 km2). The stream has one named tributary, which is known as East Branch Field Brook. The surficial geology in the vicinity of Field Brook consists of alluvium, Wisconsinan Till, alluvial terrace, alluvial fan, bedrock, wetlands, and a lake. The watershed of the stream is designated as a Coldwater Fishery and a Migratory Fishery. 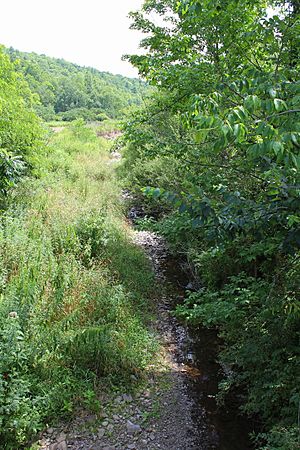 Upon exiting Susquehanna County, Field Brook enters Nicholson Township, Wyoming County and continues flowing southeast. After several tenths of a mile, it receives East Branch Field Brook, its only named tributary, from the left, and turns south-southeast. After more than a mile, the stream's valley broadens and it turns south-southwest, crossing Pennsylvania Route 92. The stream then turns southeast and then east, after a short distance reaching its confluence with Tunkhannock Creek.

As of 2015, a dam known as the McNamara Dam is located on a tributary of Field Brook. It is considered to pose a threat to public safety, so there has been a proposal to remove the dam, causing 900 feet (270 m) of stream to flow freely again.

Field Brook was entered into the Geographic Names Information System on August 2, 1979. Its identifier in the Geographic Names Information System is 1174737. The stream is also known as Fields Brook. This variant name appears in Israel C. White's 1883 book The geology of the North Branch Susquehanna River Region in the six counties of Wyoming, Lackawanna, Luzerne, Columbia, Montour and Northumberland.

The drainage basin of Field Brook is designated as a Coldwater Fishery and a Migratory Fishery.

All content from Kiddle encyclopedia articles (including the article images and facts) can be freely used under Attribution-ShareAlike license, unless stated otherwise. Cite this article:
Field Brook Facts for Kids. Kiddle Encyclopedia.