Kids Encyclopedia Facts
Not to be confused with Fincastle County, Virginia.

Fincastle is part of the Roanoke Metropolitan Statistical Area. 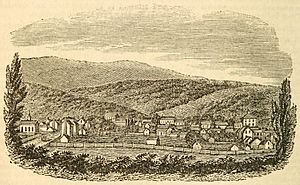 Fincastle was founded in 1772 and named after Lord Fincastle, son of Lord Dunmore, Virginia's last royal governor. As the seat of Botetourt County, Fincastle was something of the last outpost before the Western frontier serving as a supply station for settlers heading West. From its inception until the Revolutionary war, Fincastle oversaw a massive governmental district that stretched to the Mississippi River and included parts of modern-day Wisconsin. Town lore says that folks who lived more than 500 miles away were excused from jury duty. Fincastle's courthouse was designed by Thomas Jefferson and today still houses county government functions for a much smaller county and contains a vast archive of public records relevant to the late colonial Virginia and the Western expansion periods. George Washington, Patrick Henry, Thomas Jefferson and other prominent Virginians either appeared in Fincastle or sent their agents to lay claim to tracts of wilderness lands. Meriwether Lewis and William Clark departed from Fincastle when they were commissioned by President Thomas Jefferson to explore the Louisiana Purchase. A little over a year after his arrival back in Virginia, Clark married Julia Hancock of Fincastle, a cousin, on January 5, 1808.

The Judith River in Montana was named in honor of Julia Hancock by Clark during the Expedition; he mistakenly thought that was her given name, because he knew her as a child as "Judy". Upon his return from the West, he quickly took up courting his cousin in Fincastle. She moved with him to St. Louis, where besides their children, they raised and educated Jean Baptiste Charbonneau, the son of Sacagawea.

According to the United States Census Bureau, the town has a total area of 0.2 square mile (0.6 km2), all land.

All content from Kiddle encyclopedia articles (including the article images and facts) can be freely used under Attribution-ShareAlike license, unless stated otherwise. Cite this article:
Fincastle, Virginia Facts for Kids. Kiddle Encyclopedia.