Flag of Hawaii facts for kids

The flag of the state of Hawaii (Hawaiian: Ka Hae Hawaiʻi) is the official flag symbolizing Hawaii as a U.S. state. The same flag had also previously been used by the kingdom, protectorate, republic, and territory of Hawaii. It is the only U.S. state flag to feature the flag of a foreign country which is the Union flag of the United Kingdom, a remnant of the British Empire's influence on Hawaiian history. 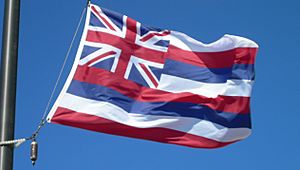 The flag of Hawaii flying in Haleakalā National Park

The canton of the flag of Hawaii contains the Union Flag of the United Kingdom, prominent over the top quarter closest to the flag mast. The field of the flag is composed of eight horizontal stripes, symbolizing the eight major islands (Hawaiʻi, Oʻahu, Kauaʻi, Kahoʻolawe, Lānaʻi, Maui, Molokaʻi and Niʻihau). Other versions of the flag have only seven stripes, probably representing the islands with the exception of Kahoʻolawe or Niʻihau. The color of the stripes, from the top down, follows the sequence: white, red, blue, white, red, blue, white, red. The colors were standardized in 1843, although other combinations have been seen and are occasionally still used.

In 2001, a survey conducted by the North American Vexillological Association (NAVA) placed Hawaii's flag 11th in design quality out of the 72 Canadian provincial, U.S. state and U.S. territorial flags ranked. 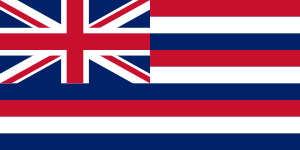 There are various accounts of the earliest history of the flag of Hawaii. One relates how King Kamehameha I flew a British flag, probably a Red Ensign, given to him by British explorer Captain George Vancouver as a token of friendship with King George III. Subsequent visitors reported seeing the flag flying from places of honor. An adviser to Kamehameha noted that the Union Flag could draw Hawaii into international conflict, as his kingdom could be seen as an ally of the United Kingdom, and he subsequently lowered the Union Flag over his home at Kamakahonu. While disputed as historically accurate, one account stated that in order to placate American interests during the War of 1812, a flag of the United States was raised over Kamehameha's home, only to be removed when British officers in the court of Kamehameha vehemently objected to it. This explains why the resulting flag of Hawaii was a deliberate hybrid of the two nations' flags. 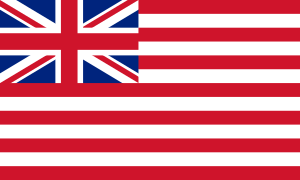 In 1816, Kamehameha commissioned his own flag to avoid this conflict, which has evolved into the current flag. It was probably designed by one of the commanders of the Royal Hawaiian Navy, former officers of the British Royal Navy, who advised Kamehameha, based on a form of the British naval flag. There is debate as to the actual designer: some credit Alexander Adams, others George Charles Beckley. It was very similar to the flag of the British East India Company in use about this time which had only red and white stripes. Captain Adams used this flag for the first time on a Hawaiian trade mission to China in 1817. 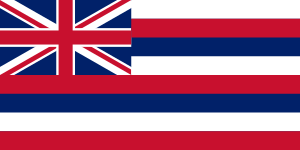 The original flag was designed to feature stripes alternating in the order red-white-blue, also attributed to various historical flags of the United Kingdom. The flag used at the first official flying of the flag of Hawaii erroneously placed the stripes in the order white-red-blue, although it seems explorers to the island disagree about the exact order of colors and the number of stripes up to the late 1840s. There may have been possibly different versions of the flag with different numbers of stripes and colors. The number of stripes also changed: originally, the flag was designed with either seven or nine horizontal stripes, and in 1845 it was officially changed to eight stripes. The latter arrangement was adopted and is used today.

In 1990, Governor of Hawaii John Waihee proclaimed July 31 to be Ka Hae Hawaii Day, the Hawaiian Flag Day. It has been celebrated each year since then.

The flag used by the governor of Hawaii is a red and blue bi-color. In the middle of the eight white stars appears the name of the state in all capital letters. During the time Hawaii was a United States territory, the letters in the middle of the flag were "TH", which stood for "Territory of Hawaii".

All content from Kiddle encyclopedia articles (including the article images and facts) can be freely used under Attribution-ShareAlike license, unless stated otherwise. Cite this article:
Flag of Hawaii Facts for Kids. Kiddle Encyclopedia.