Flag of Tasmania facts for kids

The current state flag of Tasmania was officially adopted following a proclamation by Tasmanian colonial Governor Sir Frederick Weld on 25 September 1876, and was first published in the Tasmanian Gazette the same day. The governor's proclamation here were three official flags, they being the Governor's flag, the Tasmania Government vessel flag, and a Tasmania merchant flag. Up until 1856 when Tasmania was granted responsible self-government, the Union flag and the British ensign were primarily used on state occasions.

The flag consists of a defaced British Blue Ensign with the state badge located in the fly. The badge is a white disk with a red lion passant in the centre of the disk. There is no official record of how the lion came to be included on the flag, but it is assumed that the red lion is a reference to Great Britain. This flag has remained almost unchanged since 1875, with only a slight change of the style of the lion when the flag was officially adopted by the government in 1975, although this was a mistake, as it had already been officially gazetted by the colonial government in 1876.

Following the establishment of a permanent Britisht British sovereign possession of the lands of Tasmania. Tasmania was granted responsible self-government in 1856, but the colony did not receive its own flag until Queen Victoria had first proposed on 7 August 1869, that the colony of Tasmania (and the other Australian colonies) should adopt a Union flag defaced in the centre with the State Badge. Prior to the official adoption of a local flag, an unofficial merchant ensign was occasionally used. 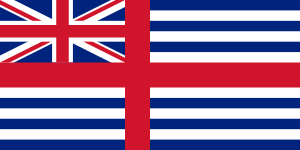 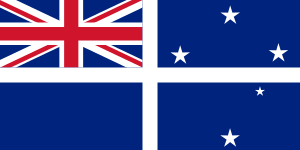 The first local flag of Tasmania was adopted by proclamation of Tasmanian colonial Governor Sir Frederick Weld on 9 November 1875. The flag had a white cross on a blue field, in the canton was the Union Flag, and in the fly was five five-pointed stars of the Southern Cross. The British Blue Ensign and Red Ensign (for use respectively by government vessels and by those privately owned) were to have a white cross added. At the fly end of each flag a Southern Cross was to be formed of white stars added above and below the horizontal arm of the cross. Two weeks later, on 23 November, those flags were officially abandoned because Henry Herbert, 4th Earl of Carnarvon, the Secretary of State for the Colonies in London made it clear that only a single badge could be placed at the fly end of the ensign, as set out by rule of the British Admiralty.

A year later the Tasmanian government decided, with the British Admiralty’s approval, that the badge for the colony would be a red lion on a white disk. Originally the lion was to be gold in colour, above a golden torse, which the new flag omitted in favour of a more traditional red.

A British Blue Ensign with the badge served Tasmanian government vessels, and privately owned vessels were to fly an un-defaced British Red Ensign. After Tasmania became a state on 1 January 1901, the Tasmanian Blue Ensign was rarely used, and was reserved for official purposes. Most vessels soon preferred to fly the Australian Red Ensign.

On 3 December 1975, a government proclamation by Governor Sir Stanley Burbury, and endorsed by Premier Bill Neilson established it as the official Tasmanian flag, although it had technically already been 'officially' adopted when it was gazetted in 1876. Since that time it has been acceptable for private citizens to use the flag, although it is uncommon to see them doing so.

The flag of Tasmania has two distinct symbols, the Union Flag (also known as the Union Jack), and the State Badge of Tasmania.

As with the Flag of Australia, the Union Flag is thought locally to symbolise Australia's history as six British colonies and the principles upon which the Australian Federation is based, Australian Flag Society although a more historic view sees its inclusion in the design as demonstrating loyalty to the British Empire.

Unlike the national flag, the flag of Tasmania is not enshrined and protected by any acts of state or Commonwealth government. As a result, there are no official legal requirements for the construction of the flag of Tasmania. However tradition and decorum dictate that is should be:

The colours of the flag, although not specified by the Flags Act, have been given the same Pantone specifications as the national flag. The Australian Government's Style Manual for Authors, Editors and Printers also gives CMYK and RGB specifications for depicting the flag in print and on screen respectively.

All content from Kiddle encyclopedia articles (including the article images and facts) can be freely used under Attribution-ShareAlike license, unless stated otherwise. Cite this article:
Flag of Tasmania Facts for Kids. Kiddle Encyclopedia.