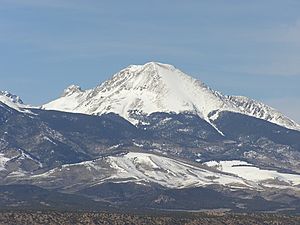 Fort Garland is a census-designated place (CDP) in Costilla County, Colorado, United States. The population was 433 at the 2010 census. The Fort Garland Post Office has the ZIP code 81133.

Fort Garland is referred to as the "Gateway to the San Luis Valley", as it is the first town one encounters when traveling west having crossed over La Veta Pass in the Sangre de Cristo Range. Fort Garland is home to many artists, painters, crafters and internationally known musicians.

The Blanca/Fort Garland Community Center is open to residents and the public on daily, monthly or annual fees.

The Entrada Visitor's Center offers information on local and regional points of interest, such as the Great Sand Dunes, the Colorado 'Gator farm, UFO Watchtower and other activities located within the San Luis Valley.

Fort Garland is at the crossroads of U.S. Route 160 and Colorado State Highway 159, which leads south towards Taos and Santa Fe, New Mexico.

Fort Garland was established in 1858 to protect settlers in the San Luis Valley, then part of the New Mexico Territory. The fort was abandoned in 1883, following the confinement of the Utes to reservations. The Fort Garland Museum preserves some of the historic buildings from the fort.

According to the United States Census Bureau, the Fort Garland CDP has a total area of 0.37 square miles (0.97 km2), all of it land.

There were 152 households out of which 42.8% had children under the age of 18 living with them, 56.6% were married couples living together, 18.4% had a female householder with no husband present, and 20.4% were non-families. 18.4% of all households were made up of individuals and 8.6% had someone living alone who was 65 years of age or older. The average household size was 2.84 and the average family size was 3.19.

All content from Kiddle encyclopedia articles (including the article images and facts) can be freely used under Attribution-ShareAlike license, unless stated otherwise. Cite this article:
Fort Garland, Colorado Facts for Kids. Kiddle Encyclopedia.