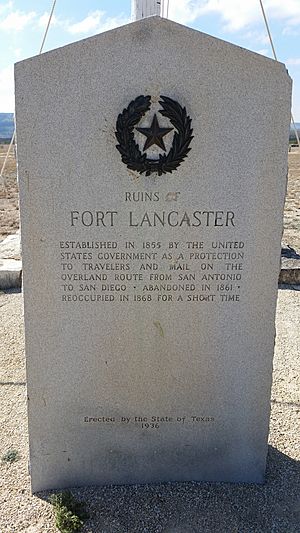 Fort Lancaster, one in a series of forts erected along the western Texas frontier, is located in the Pecos River Valley, along Live Oak Creek, in Crockett County, Texas, United States. The fort was established by Captain Stephen Decatur Carpenter on August 20, 1855, to guard the military supplies, commercial shipments, and immigrants moving along the San Antonio-El Paso Road. The 82-acre site, now operated by the Texas Historical Commission as Fort Lancaster State Historic Site, contains the ruins of twenty-nine buildings that made up the fort and a visitor center with a museum about the heritage of the fort.

On 7 Aug. 1855, Capt. Stephen Carpenter, West Point Class 1840, left Fort Duncan with 1st Infantry Co. H and K, and established Camp Lancaster on Live Oak Creek on 20 Aug. The camp was probably named after Capt. Carpenter's classmate, Job Roberts Hamilton Lancaster. When it was initially constructed in August, 1855 as Camp Lancaster, the buildings were tents, followed by simple shelters covered with canvas known as jacales. A short time later pre-fabricated parts of experimental modular buildings, U.S. Army “Turnley Portable Cottages”, were hauled by wagon from the railhead in San Antonio and erected at the site.

On 12 October 1855 Captain Carpenter led a small detail several miles upstream along Live Oak Creek to find a tree to serve as a flagpole for the new fort. The party encountered a band of Apache passing through the area. In a brief firefight, a teamster was killed. Carpenter and two troopers dismounted to control their mounts. The Indians used the cover of brush to work closer, until they could fire arrows at the soldiers. They yelled savagely and used whistles to communicate, hoping to overpower the small force. When within a dozen paces of Carpenter, two warriors unleashed a volley of arrows at the captain, one striking his horse in the neck and another hitting him in the right hand. His pistol stopped it from passing through his hand into his body. Carpenter shot one warrior in the chest, killing him. Dropping his pistol, he desperately attempted to raise a shotgun against the other Indian. A trooper shot the Indian before he could reach Carpenter. The group returned to the post, bloodied, with only the one loss.

Capt. Robert S. Granger took over command on 2 February 1856. Camp Lancaster became Fort Lancaster on 12 August 1856. By 1857, "the garrison was still housed in Turnley buildings, but barracks of stone and adobe were under construction," and on 9 July, the U.S. Camel Corps stopped at the post on its way to New Mexico. By 1858 the fort was garrisoned by 152 men. Company H then left the fort on 12 April 1859 "to take post" at Fort Stockton along Comanche Springs.

Fort Lancaster was abandoned by the U.S. Army on March 19, 1861, after Texas seceded from the Union. U.S. troops and their dependants (a few families, including enlisted men's wives serving as laundresses) and the contract sutler were allowed by Texas State Troops to leave the fort with their arms, equipment, horses, draft animals, wagons, and personal belongings; they went to San Antonio, boarded trains for the Texas coast, and sailed away on U.S. ships. After declaration of war the fort was garrisoned by Company F, Second Regiment of the Texas Mounted Rifles, recently taken into the Confederate States Army, from December 1861 through April 1862. When the Civil War ended the fort was abandoned by Texas troops and the buildings began to deteriorate from vandalism and the harsh climate. 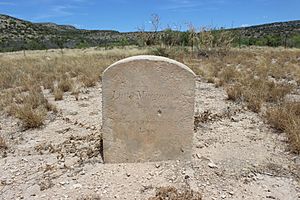 When the Civil War ended the U.S. Army occupied Texas; Texas was under U.S. Army administration until 1875. During the occupation several other frontier forts were established in Texas. Various companies of the 9th Cavalry rotated through Fort Lancaster and gradually the outpost was rebuilt. These soldiers escorted stagecoaches westward and fought skirmishes with Apaches. In December 1867 the U.S. 9th Cavalry's Company K, a unit of African American cavalrymen with white commissioned officers, was stationed at the fort. These were seasoned “horse soldiers” including Civil War veteran non-commissioned officers. Largely because white cavalry units objected to designating them as “U.S. Cavalry”, they were furnished with “saddle mules" and horses inferior to those of other U.S. cavalry units; sometimes they were issued outdated arms and other such second-rate equipment. Despite their equally dangerous and arduous duties they were officially called “mounted infantry.” A motto ascribed to them was "forty miles a day on beans and hay." On December 26, 1867, a large band of Kickapoo and Comanchero raiders attacked the fort to steal horses. The company repelled the attack but lost 38 horses and mules. Some of the raiders returned two days later; they were unsuccessful in taking the remaining animals. The fort was not challenged by the renegades again.

In 1871 the fort's troops were active in dealing with the Kiowa-Comanche uprising. After the trouble subsided the fort was completely abandoned in 1873 or 1874. During the following decades much of the building material from the fort was used for buildings in the vicinity, particularly in Sheffield, about seven miles (8.4 km) west.

Within 40 years after being built, the wooden-frame superstructures of some buildings at the fort burned. "Only a few partially extant walls, a chimney, and numerous wall foundations remained in 1912." This was the general condition of the site when the first scientific archeological investigations were conducted in 1966. Archeological excavations were again conducted in 1971 when the site was mapped and test excavations were done. Archeological investigations in 1974 revealed that officers' quarters buildings had wood-plank floors, thresholds, and doorjambs fitted with iron pintels; the assumption is that doors were also of wood. These carbonized remains were left in situ after being exposed during archeological investigations, photographed, and recorded by measured drawings using grid systems tied to "modern" architectural features of the park facilities. The excavation units were stabilized by careful backfilling with soil removed from those units to protect the remains for anticipated future public display. Subsequent archeology in 1975 and 1976 revealed that wooden superstructure and flooring of site's commanding officer's residence and the sutler's store had likewise been destroyed by fire. Architectural details of buildings investigated by archeological excavation 1974-1976 indicate that before the buildings burned they were all similar in design and construction, as would be expected of military engineering. 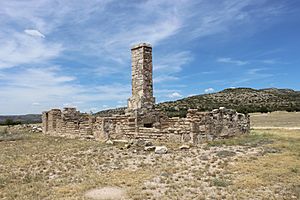 Fort Lancaster was deeded to Crockett County in 1968 by private owners for its preservation and public use. Title to the land subsequently was transferred to Texas Parks and Wildlife Department (TPWD) on April 16, 1968.

TPWD architects attempted the first interpretative restoration at the site with modern cement mortar to stabilize the remaining stone walls and cement-fortified adobes to simulate the original plain-mud adobes of the enlisted men's mess-hall. Associated with the 1974–1976 archeological investigations and as a preservation measure the archeologists in 1976 made adobes from untempered mud dug on site with hand tools. These adobes, sized to duplicate the original adobe bricks, were laid atop remaining original adobe walls at some of the officer's quarters on the north side of the parade ground. Remains of these adobes still formed a protective preservative layer as late as April, 2010. A budget shortfall prompted the State to yield management of the site to Texas Rural Communities, Incorporated, in 1993. On January 1, 2008, operational control of the site was transferred from TPWD to the Texas Historical Commission, which now manages preservation and public visitation of the site.

A scale model of Fort Lancaster is on display at the Crockett County Museum in nearby Ozona, Texas.

All content from Kiddle encyclopedia articles (including the article images and facts) can be freely used under Attribution-ShareAlike license, unless stated otherwise. Cite this article:
Fort Lancaster Facts for Kids. Kiddle Encyclopedia.