Fort Mason, once known as San Francisco Port of Embarkation, US Army, in San Francisco, California, is a former United States Army post located in the northern Marina District, alongside San Francisco Bay. Fort Mason served as an Army post for more than 100 years, initially as a coastal defense site and subsequently as a military port facility. During World War II, it was the principal port for the Pacific campaign.

Today it is part of the Golden Gate National Recreation Area and the site of several cultural facilities. It is a National Historic Landmark District with over 49 buildings of historic significance, spread over 1,200 acres (490 ha).

Fort Mason Center (foreground) with Oakland and Russian Hill (on the right) in the distance.

The nucleus of Fort Mason was a private property owned by John C. Frémont, the world-famous explorer of the US west, who also spearheaded the conquest of California from Mexico, and ran as the first presidential nominee of the extant Republican Party in 1856. As alleged in a 1968 federal lawsuit filed by his descendants over the 70-acre parcel then at issue, Frémont bought a 13.5-acre property in the mid-1850s for $42,000, and then improved it by about $40,000.

Appointed a Major General in the Union army at the start of the Civil War, Frémont's repeated serious conflicts with President Lincoln led him to resign by late 1862. In 1863, the government seized the property without payment, by executive order of Lincoln, on the grounds it was needed for the war effort. Frémont would again contest the US presidency in 1864, running as the candidate of radical Republicans, only resigning the effort when Lincoln fired a political enemy in his cabinet as a concession.

The 1968 lawsuit was perhaps the last shot of a century-long legal struggle to obtain compensation for the seized realty. In 1870, the government returned property to 49 parties in the vicinity, but not to Frémont and a few others. At that time, Frémont was still very preoccupied with enough of the vast fortune he had made through gold-mining before the Civil War that the matter was unlikely of concern to him; but by 1872 he was in grave financial trouble he would never escape before his demise in 1890. Over the years, at least 24 Congressional committees would vote to compensate Frémont, and finally in February 1893 President McKinley signed a bill directing that the court of claims fix the compensation due. But in 1968 the Frémont heirs complained it had failed to carry out this direction, with John Frémont then recently dead and his widow Jessie nearly 70 years old.

The fort as government property

The Civil War prompted the construction of several coastal defense batteries located inside the Golden Gate. Initially these defenses were built as temporary wartime structures rather than permanent fortifications and one of these was constructed in 1864 at Point San Jose, as the location of Upper Fort Mason was then known. A breast-high wall of brick and mounts for six 10-inch (250 mm) Rodman cannons and six 42-pounder guns were built on the site. Excavation in the early 1980s uncovered the well-preserved remains of the western-half of the temporary battery, and it has now been restored to its condition during the Civil War.

The fort was named Fort Mason in 1882, after Richard Barnes Mason, a former military governor of California.

President Grover Cleveland established the Endicott Board in 1885 for the purpose of modernizing the nation's coastal fortifications. Chaired by Secretary of War William Endicott, the board recommended new defenses at 22 U.S. seaports, deeming San Francisco Harbor second only to that of New York in strategic importance. As a result, an extensive series of forts, batteries, and guns were built on the harbor, including Fort Mason.

The piers and sheds of Lower Fort Mason were originally built from 1912 to warehouse army supplies and provide docking space for army transport ships. By this time, the US Army began to build new bases in Hawaii, the Philippines, and various other Pacific islands. Most of the materiel for those bases was shipped through San Francisco. By 1915, the three piers together with their associated warehouse had been completed, and Fort Mason Tunnel driven under Upper Fort Mason to connect with the railroad network along the Embarcadero.

With these new facilities, Fort Mason was transformed from a harbor defense post into a logistical and transport hub for American military operations in the Pacific. The Army ferry USAT General Frank M. Coxe provided scheduled transportation from Fort Mason to the processing center at Fort McDowell on Angel Island up to eight times per day during the war. USAT Meigs was used to transport cavalry horses from Fort Mason's pier to Fort Mills. 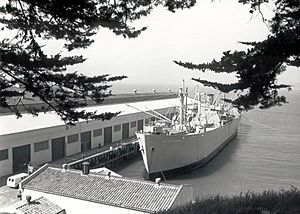 The SS Jeremiah O'Brien is a World War II era Liberty ship. Built in 57 days, the ship is an example of the United States rapid response to sealift demands of the war. 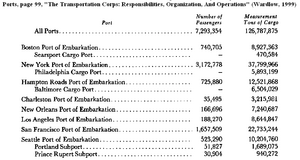 Army Ports: Passengers and tons of cargo embarked during the period December 1941 – August 1945.

During World War II, Fort Mason became the headquarters of the San Francisco Port of Embarkation, controlling a network of shipping facilities that spread across the Bay Area. Over the years of the war, 1,647,174 passengers and 23,589,472 measured tons moved from the port into the Pacific. This total represents two-thirds of all troops sent into the Pacific and more than one-half of all Army cargo moved through West Coast ports. The highest passenger count was logged in August 1945 when 93,986 outbound passengers were loaded.

The Korean War in the 1950s also kept the post busy, and in 1955 the San Francisco Port of Embarkation was renamed the U.S. Army Transportation Terminal Command Pacific. The embarkation operations continued through the early sixties. In 1965 the headquarters of the US Army Transportation Terminal Command were transferred to the Oakland Army Terminal, and most of Fort Mason's embarkation facilities fell into disuse. The Army continues to use and maintain the old officer housing. The National Park Service took over the administration of the site in the 1970s as a part of the Golden Gate National Recreation Area. In 1976 lower Fort Mason became the Fort Mason Center, a non profit organization that provides a destination for programs, events and organizations that support and reflect the evolving cultural fabric of San Francisco and the Bay Area. (GGNRA). 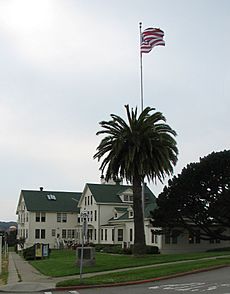 Some of the old officer housing remains in use by the Army, while some is rented to the public. One of the larger buildings has been converted into a youth hostel, operated by Hostelling International USA.

As a whole, the former post is now a mix of parks and gardens and late nineteenth and early twentieth century buildings that are still in use. A path follows the harbor edge, rising along the headland and offering views north past Alcatraz and west to the Golden Gate Bridge.

The National Park Service headquarters for both the Golden Gate National Recreation Area and the San Francisco Maritime National Historical Park are located in Fort Mason.

Operations for the United States Park Police are located in the fort, providing police services for the Golden Gate National Recreation Area in San Francisco and Marin County.

Every Friday since 2010 from March through October, an Off the Grid gathering of food trucks occurs and draws large crowds.

A proposal exists to extend the F Market & Wharves or E Embarcadero historic streetcar line to a terminal at Lower Fort Mason. This extension would run from the vicinity of the existing terminal near Fisherman's Wharf, westward alongside the San Francisco Maritime Museum and Aquatic Park, and then through the existing, now unused, San Francisco Belt Railroad tunnel under Upper Fort Mason.

A technical feasibility study, under the aegis of the National Park Service and San Francisco Municipal Railway, was completed in December 2004. An Environmental Impact Statement for the extension, involving the San Francisco Municipal Railway, National Park Service and Federal Transit Administration, commenced in May 2006. The Draft Environmental Impact Statement (DEIS) was completed in March 2011, and was scheduled to be reviewed by December 2011.

All content from Kiddle encyclopedia articles (including the article images and facts) can be freely used under Attribution-ShareAlike license, unless stated otherwise. Cite this article:
Fort Mason Facts for Kids. Kiddle Encyclopedia.