The settlement was originally called "Slide," for Slide Hill, in 1874, named for the slide that was a fixture on the northeast side of the Eel River and the southwest portion of Christian Ridge just to the northwest, near the edge of town. In 1875, the name was changed to Springville during the construction of the Springville Mill, a lumber mill for the nearby redwood forests, named so because of the numerous springs in the area. The mill's owners were Henry Rohner (namesake of neighboring Rohnerville), Alexander Masson, M. N. Weber and G. F. Gushaw. Springville was originally a company town belonging to the mill, and the few people that resided there all worked at the mill. By the late 1870s Springville had grown enough to warrant a post office, but a town called Springville, California (now part of Camarillo, in Ventura County) already existed in the state. The post office was named Slide on May 24, 1876. In 1884 the residents petitioned the state legislature for the name Fortuna, Spanish for "fortune" and Latin for "chance," and by July 3, 1888 the name was changed to Fortuna. The name was chosen when settlers saw the proximity of the forests, the river and its valley, and the Pacific Ocean, as ideal for enjoying a good quality of life, and felt "fortunate" to live there. It is believed that a local minister and real estate agent, desiring to sell lots to newcomers, devised the name as a marketing tool.

Electricity came to Fortuna in 1883 when W. J. Swortzel and George W. Williams (of Swortzel & Williams), owners of the Springville Mill Company, built a $4,000 power plant. Some of the local sawmills were already powered by electricity, and by providing power to the mills, Swortzel and Williams saw the opportunity to also provide inexpensive electric lighting to the townspeople.

The town was incorporated on February 20, 1906, and, because of the Eel River, became known for its agricultural prowess in vegetable crops, berries and fruits, and for the fresh fish from the river. Although agricultural industry was expanding, the lumber industry is what started the town, and would continue as the main source of local income for some time to come.

Rohnerville (formerly Eel River Township), a town founded to service the many gold miners inhabiting the mountains to the north and east, was competing with Fortuna to be the leading township in the area. The miners would come by ship to Eureka, and then head up the Eel River to the junction with the Van Duzen River, from whence the miners headed east up the Van Duzen River Valley into Trinity County. Rohnerville was at this junction, and looked to prosper from selling supplies to the miners. But when it was decided that the railroad would be routed through neighboring Fortuna, it set both towns' fate.

The Eel River and Eureka Railroad was built in 1884 to provide Humboldt Bay shipping access to the lumber mills and farms of the lower Eel River. Atchison, Topeka and Santa Fe Railway reorganized Fortuna's railroad as the San Francisco and Northwestern Railway in 1903, and then completed the Northwestern Pacific Railroad to San Francisco in 1914. Fortuna became the rail hub for smaller communities like Alton, Fernbridge, Ferndale, Hydesville, Newburg, Port Kenyon, Rohnerville, and Waddington. Fortuna was the location of one of two secondary mills of the storied Pacific Lumber Company, headquartered ten miles south in Scotia.

Since Fortuna's earliest days in the 1800s, its nickname has been "The Friendly City."

According to the United States Census Bureau, the city has a total area of 4.8 square miles (12 km2), all of it land.

Fortuna is located 7 miles (11 km) from the Pacific coast on the bank of the Eel River. The community is affected by coastal weather patterns with the Pacific Ocean to the west. Fortuna is served by U.S. Route 101 providing direct access to San Francisco 253 miles (407 km) to the south, and to Eureka (County Seat) 14 miles (23 km) to the north. The western terminus of California State Route 36 intersects U.S. Route 101 1 mile (1.6 km) just south of the city limits. Fortuna is surrounded by national, state and county redwood parks, and is the gateway to the redwood forests of Northern California. Sequoia sempervirens grow to about 300 feet (91 m) and live to be 2,500 years old. The 33-mile (53 km) Avenue of the Giants offers one of the most spectacular views of the redwoods as it carries visitors through grove after grove. Stops include Founders Grove, the Visitor Center near Weott and several locations that provide trail access. 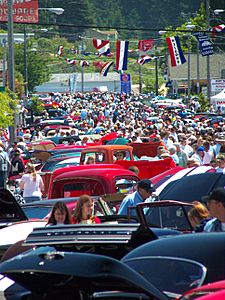 The city has a large number of events and festivals including the Daffodil Festival, Art & Wine in the Park, the Annual Fortuna Rodeo, the Redwood AutoXpo, the Logging Competition, Civil War Days, and Apple Harvest, the Hops in Humboldt festival, the Fortuna Concert Series and holiday events including concerts and parades with performances by Scotia Band Brass Choir and Saxophone Quartet. Additionally, the Eel River was the locale for the Paddle to the Headwaters canoe race. 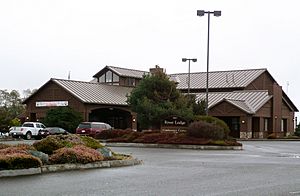 Fortuna is served by the Fortuna Elementary School District and the Fortuna Union High School.

All content from Kiddle encyclopedia articles (including the article images and facts) can be freely used under Attribution-ShareAlike license, unless stated otherwise. Cite this article:
Fortuna, California Facts for Kids. Kiddle Encyclopedia.