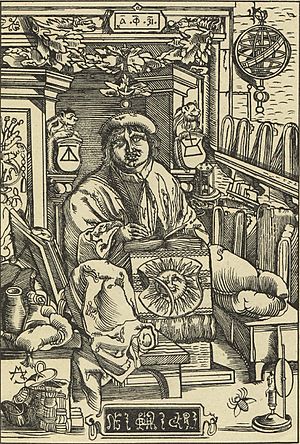 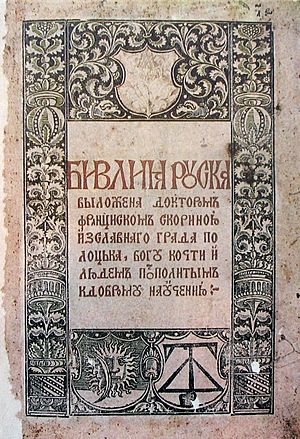 Francysk Skaryna was a Belarusian famous as one of the first publishers in Eastern Europe. He helped develop the Belarusian language.

He was born in the historical Belarusian city of Polotsk into the family of a rich merchant. The exact dates of birth and death are unknown. It was about 1485–1540 or 1490–1551.

Skaryna graduated from the arts faculty at the University of Kraków in 1504. In 1512 he received doctorate in medicine at the University of Padua in Italy. In 1517 he made a printing press in Prague. He published his first book called The Psalter, in the Old Belarusian language on 6 August 1517. The most important part of his life's work was printing a translation of the Bible in 22 books during 1517 to 1519.

Around 1522 he moved to Vilnius. He made the first printing house in the Grand Duchy of Lithuania. The first book published there was The Little Travel Guide. The printing house closed down. Skaryna spent his last years working as a doctor for Ferdinand I of Germany.

All content from Kiddle encyclopedia articles (including the article images and facts) can be freely used under Attribution-ShareAlike license, unless stated otherwise. Cite this article:
Francysk Skaryna Facts for Kids. Kiddle Encyclopedia.