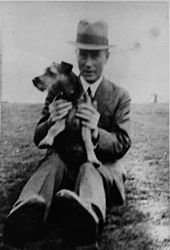 Frederick Griffith (1879 - 1941) was a English medical officer and geneticist. In 1928, during an experiment, he discovered what he called a transforming principle, but today we call DNA.

He was born in Hale, Lancashire and attended Liverpool University where he studied genetics. In his younger days he worked at the Liverpool Royal Infirmary, the Thompson Yates Laboratory, and the Royal Commission on Tuberculosis.

The experiment began when Griffith was trying to make a vaccine to prevent pneumonia infections in the "Spanish flu" influenza pandemic after World War I, by using two strains of the Streptococcus pneumoniae bacterium.

Griffith was killed at work in his laboratory in 1941, along with longtime friend and bacteriologist William M. Scott in London during an air raid in the London blitz. Years later Griffith's "transforming principle" was identified as DNA by Oswald Avery, along with coworkers Colin MacLeod and Maclyn McCarty, in 1944. The Avery–MacLeod–McCarty experiment.

All content from Kiddle encyclopedia articles (including the article images and facts) can be freely used under Attribution-ShareAlike license, unless stated otherwise. Cite this article:
Frederick Griffith Facts for Kids. Kiddle Encyclopedia.