The Frenchmans Cap is a mountain in the West Coast region of Tasmania, Australia. The mountain is situated in the Franklin-Gordon Wild Rivers National Park.

The mountain lies east of the West Coast Range, yet due to its prominence, it can bee seen from Macquarie Harbour. It lies south of the Lyell Highway from which it can be viewed from various locations, and south west of Cradle Mountain-Lake St Clair National Park.

The peaks of the Frenchmans area include:

The mountain lies in traditional lands of Aboriginal Tasmanians. They named the peak 'maberlek'.

Even though the peak was an early landmark for ships sailing the west coast, the first recorded use of Frenchmans Cap was in 1822 in connection with Macquarie Harbour Penal Station, from where the peak was visible. The origin of the name is attributed to its appearance from some angles as looking like a Frenchman's cap, notably the Liberty cap worn during the French Revolution (1789–1799).

A variation of that was reported by Henry Widdowson, who wrote in 1829 that the name was derived from "its generally being covered with snow and bearing some resemblance to the shape of dress which invariably adorns the head of a French Cook". 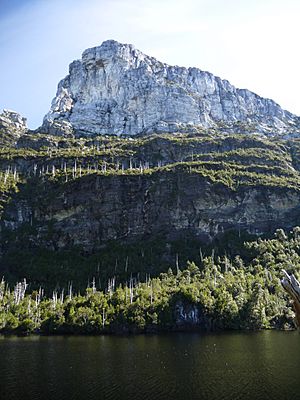 The distinctive shape of the mountain was used as a guiding beacon by many, largely unsuccessful, parties of escaping convicts as they attempted to struggle through the dense scrub of Western Tasmania to the settled districts further east. It was mentioned as a geographical reference in the account later dictated by convict Alexander Pearce to authorities, following his capture.

The earliest European recorded to have ascended was James Sprent and his trigonometrical party in 1853.

The country around the mountain is invariably referred to by the books and the material written about the Franklin River. Johnson Dean's book gives a graphic account with maps and pictures the nature of the country.

Access to the mountain is usually via hiking and then climbing the summit with the main access point on the Lyell Highway. Parks and Wildlife Service and other authorities in Tasmania have advice about the access and preparation needed - due to the conditions of the area. The track is repeatedly overgrown, due to the vegetation and the rainfall of the area.

The walk to the peak along the well marked track typically takes two days. The first day of about 16 kilometres (9.9 mi) will bring walkers to Lake Vera Hut. This part of the walk includes two steep and prolonged ascents separated by the boggy Loddon Plains. The so-called "Sodden Loddons" are almost always muddy and crossing them may take two hours or more. In wet weather the mud can be waist high. In summer it is only knee high. Water is plentiful (and drinkable) in all seasons. Walk time from Lyell Highway to Lake Vera is between six and eight hours.

The second day's walk is shorter at 9 kilometres (5.6 mi), but steeper. After walking along the shores of Lake Vera the next two hours are spent struggling up the steep inclines to Barron Pass. Once on top the walker is presented with a dramatic view of Frenchmans Cap. From Barron Pass it is approximately another two hours to Tahune Hut, depending on fitness and pack weight. Water is again available along the way. Walk time from Lake Vera to Lake Tahune is about four hours.

There are two lakes on the way to the summit – Lake Vera, and Lake Tahune – there are huts at both of these locations. Lake Vera Hut was built in 1979 and sleeps 20 people in two two-tier bunk configurations. It is heated by a stove using brickette fuel (similar to heat beads in BBQs).

Lake Tahune Hut was built in 1971 and sleeps 16 people snugly, also in two two-tier bunks. It is also heated by a brickette fuel stove. At Tahune, the steep walker's track to the top of the Cap takes under an hour.

If the weather is clear the view includes the West Coast beaches, Lake Burbury and the many peaks – such as Tasmania's tallest, Mount Ossa – in the Cradle Mountain-Lake St Clair National Park.

The 50-kilometre (31 mi) plus walk to Frenchmans Cap is typically completed as a return trip on the same track.

For climbers, Frenchmans Cap offers a variety of routes on generally sound, quartzite rock. In keeping with the name of the mountain some of these climbs also have French names including A Toi La Gloire (better known as The Sydney Route), a 380-metre (1,250 ft), 13-pitch, Australian grade 17 climb on the south-east face and Tierry Le Fronde, a 150-metre (490 ft), six-pitch, Australian grade 16 climb on the Tahune Face. Both of these climbs are traditional or gear climbs.

Frank Hurley's black and white images from the 1950s which are in the National Library online collection, are probably the most evocative and easily accessible images close up of the features around Frenchmans Cap.

Barry Maitland's 2008 mystery novel Bright Air contains a vivid description of a climb of Frenchmans Cap. It also features in For the Term of His Natural Life by Marcus Clarke and the non-fiction book Hell's Gates: The terrible journey of Alexander Pearce, Van Diemen's Land cannibal by Paul Collins (Hardie Grant, 2002). A more recent book is by Simon Kleinig in 2012.

All content from Kiddle encyclopedia articles (including the article images and facts) can be freely used under Attribution-ShareAlike license, unless stated otherwise. Cite this article:
Frenchmans Cap Facts for Kids. Kiddle Encyclopedia.