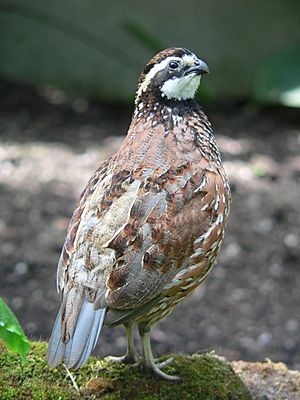 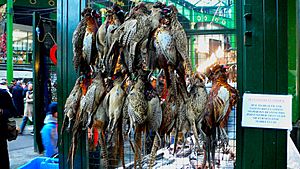 Game birds are wild birds which are hunted, killed and eaten by humans. It is a sport, and a way of getting food. It happens in most countries, but the details vary. Usually there are laws which govern the hunting. Usually, guns are used, and so there are gun laws. Also, regulations protect the birds' breeding season, so that another generation of birds will grow to replace the present generation.

Although the birds are wild, most of them are "managed" if they live on estates. Of course, birds which migrate cannot be managed in the same way. Shooting game birds on Scottish estates is for them a major source of income. The managing consists of making sure there are enough birds for the next shooting season.

In the UK game is defined in law by the Game Act 1831. It is illegal to shoot game on Sundays or at night. Other (non-game birds) that are hunted for food in the UK are specified under the Wildlife and Countryside Act 1981. The Royal Society for the Protection of Birds (RSPB) and the Forestry Commission have a big say in how the hunting is regulated.

UK law defines game as including:

All content from Kiddle encyclopedia articles (including the article images and facts) can be freely used under Attribution-ShareAlike license, unless stated otherwise. Cite this article:
Game bird Facts for Kids. Kiddle Encyclopedia.