The Ganaraska River is a river in Northumberland County and the Regional Municipality of Durham in Southern Ontario, Canada. It is part of the Great Lakes Basin, and is a tributary of Lake Ontario, which it reaches at the central community of the municipality of Port Hope. The river's name is thought to originate from Ganaraske, the name for the Cayuga village which was located at the current site of Port Hope.

The river begins on the Oak Ridges Moraine in the Ganaraska Forest in the municipality of Clarington, about 1.5 kilometres (0.9 mi) southeast of the junction of Ontario Highway 35 and Ontario Highway 115. It flows southeast past the community of Kendal, takes in the left tributary North Ganaraska River, then turns south to its mouth on the north shore of Lake Ontario.

Portions of the Ganaraska River drainage basin of 278 square kilometres (107 sq mi) extend into the City of Kawartha Lakes; the Township of Cavan–Monaghan, Peterborough County; and the Township of Hamilton, Northumberland County.

There have been major conservation efforts in recent years.

It attracts anglers for salmon and trout. The Ganaraska River Fishway, a fish ladder, allows rainbow trout to travel up river to spawn.

The river had a flood in 1980, that caused considerable damage to the Port Hope downtown area. 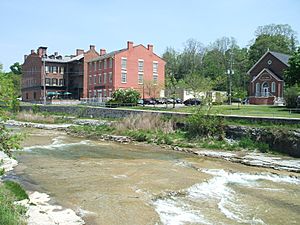 All content from Kiddle encyclopedia articles (including the article images and facts) can be freely used under Attribution-ShareAlike license, unless stated otherwise. Cite this article:
Ganaraska River Facts for Kids. Kiddle Encyclopedia.