Gawler is the first country town in the state of South Australia, and is named after the second Governor (British Vice-Regal representative) of the colony of South Australia, George Gawler. It is about 40–44 km (25–27 mi) north of the centre of the state capital, Adelaide, and is close to the major wine producing district of the Barossa Valley. Topographically, Gawler lies at the confluence of two tributaries of the Gawler River, the North and South Para rivers, where they emerge from a range of low hills. It is now a suburb of the Greater Adelaide metropolitan area. 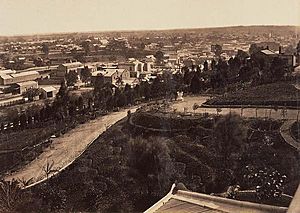 A British colony, South Australia was established as a commercial venture by the South Australia Company through the sale of land to free settlers at £1 per acre (£2/9/5d per hectare). Gawler was established through a 4,000-acre (1,600 ha) "special survey" applied for by Henry Dundas Murray and John Reid and a syndicate of ten other colonists.

The town plan was devised by the colonial surveyor William Light, and was the only town planned by him other than Adelaide. William Jacob used Light's plans and laid out the town.

Adelaide became a model of foresight with wide streets and ample parklands. After Light's death, it also became a model for numerous other planned towns in South Australia (many of which were never built). As the only other town planned by Light, Gawler is dissimilar to Adelaide's one square mile (2.6 km²) grid; the heart of Gawler is triangular rather than square, a form dictated by the topographical features. The parkland along the riverbanks and a Victorian preference for public squares are present, but Light was aware that he was planning a village, not a metropolis.

Gawler prospered early with the discovery of copper nearby at Kapunda and Burra, which resulted in Gawler becoming a resting stop to and from Adelaide. Later, it developed industries including flour milling by Hilfers & Co, and the engineering works of James Martin & Co manufactured agricultural machinery, mining and ore-processing machinery and smelters for the mines of Broken Hill and the Western Australian goldfields, and steam locomotives and rolling stock. May Brothers & Co. also manufactured mining and agricultural machinery.

With prosperity came a modest cultural flowering, ("The colonial Athens" was its nickname in the late 19th and early 20th centuries), the high point of which was the holding of a competition to compose an anthem for Australia in 1859, four decades before nationhood. The result was the Song Of Australia, written by Caroline Carleton to music by Carl Linger. This became, in the next century, a candidate in a national referendum to choose a new National Anthem for Australia to replace God Save the Queen.

Gawler is a commercial centre for the Mid-North districts of South Australia and, increasingly, a dormitory town for Adelaide.

Gawler is just over forty kilometres north of Adelaide city centre along Main North Road. Main North Road was the historic road to the Mid North region of South Australia. North of Gawler, the road is now known as the Horrocks Highway. The Sturt Highway runs northeast from the north side of Gawler, leading to Nuriootpa, the Riverland, Mildura and Sydney. The Barossa Valley Way runs east from the centre of Gawler into the Barossa Valley, and was the original route of the Sturt Highway. The Thiele Highway leads north between the Horrocks and Sturt Highways to Freeling, Kapunda and Morgan. The Max Fatchen Expressway is a new highway to the southwest providing a bypass of Gawler as part of the North–South Corridor, Adelaide which will eventually provide a non-stop road from south of Adelaide to Nuriootpa.

Gawler railway station was the terminus of the railway from Adelaide from 1857. The railway was extended to Kapunda in 1860. Gawler became a junction station when a branch was constructed into the Barossa Valley in 1911. This is the line that provides the Gawler Oval and Gawler Central (originally named North Gawler) railway stations in Gawler. Gawler Central is now the terminus of the metropolitan rail services from Adelaide. 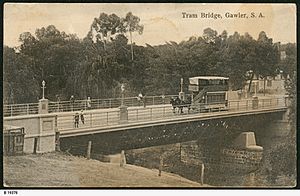 Gawler's horse-drawn tram service opened in 1879. It operated for both goods and passengers from the railway station along what is now Nineteenth Street (then known as part of Murray Street) and Murray Street (the town's main street) to a terminus near where the Gawler Central station is now. It passed the James Martin & Co engineering factory, providing a convenient way to deliver heavy equipment such as locomotives manufactured there. Broad gauge locomotives were taken directly on the tramway, narrow gauge were transported on specially-built flat-bed trucks. There were also sidings at May Brothers and Company, Roedigers, and Dowson's Mill. The tram closed in 1931 replaced by a bus, and the tracks lifted soon after.

All content from Kiddle encyclopedia articles (including the article images and facts) can be freely used under Attribution-ShareAlike license, unless stated otherwise. Cite this article:
Gawler, South Australia Facts for Kids. Kiddle Encyclopedia.