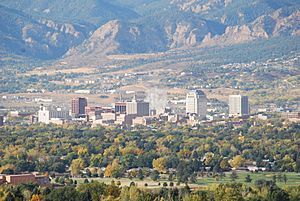 Colorado Springs geography describes geographical topics regarding the city of Colorado Springs, Colorado in El Paso County, Colorado. With 194.87 sq mi (504.7 km2) of land, it is the state's largest-sized city. Denver is the most populated city.

Colorado Springs is located in the Pikes Peak area in El Paso County, along the Front Range a forty-mile corridor from the city up to Fort Collins. At the edge of the southern Rocky Mountains, it is bordered by State, National Forest Service, and Bureau of Land Management land. North of the city is the Palmer Divide, the plains and grasslands are to the east, and Pueblo is to the south. The city was founded at the confluence of Monument Creek with Fountain Creek of the Arkansas River watershed. Its major highway is Interstate 25 that runs along that Front Range Urban Corridor to Castle Rock, Denver, Fort Collins, and Pueblo.

Colorado Springs, with an average rainfall of about 15-16 inches, has a semi-arid climate with relatively mild temperatures. The terrain is drier south of the city. Colorado Springs is 6,035 feet (1,839 m) in elevation.

The city, founded near Fountain and Mountain Creeks, primarily on Pierre Shale. On the eastern side of the city are hills of Tertiary and Cretaceous sandstone. Sandstone ledges are Dakota Formation. Pedimont rock is prevalent in the north portion of the city. There are pediment gravels on the west side. The mountains have been quarried for limestone.

Scenic Pennsylvanian rock formations are found at Garden of the Gods. The natural gap between the sandstone Austin Bluffs is Templeton Gap, and a few westernmost portions of the city are on the east escarpment's slope of the Southern Rocky Mountains section adjacent to the Colorado Piedmont, separated by the Fall line of the Front Range. 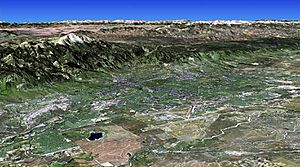 Of the city's land, 26% is residential. The higher the percentage, the greater the demand and total costs for city services, like recreational and park facilities. The population growth has been significant since the 1970s.

Institutional and commercial property use a total of about 17% of the city's land. The city, once an urban-industrial society, has become a modern-technological one.

The city owns more than 15,000 acres of open space and park, including North Cheyenne Cañon Park, Garden of the Gods, and Palmer Park, and North Cheyenne Cañon Park. There are more than 6,000 acres of open space land, 8,000 acres of parkland, and about 300 miles of trails in Colorado Springs and the nearby area. The city, which borders national and state park lands, has canyons, bluffs, mesas, rock formations, treed foothills, mountain creeks, and grasslands. The city's Parks, Recreation, and Cultural Services Department also manages urban forest, two golf courses, recreation centers and programs, and the Pikes Peak Highway.

About 1% of the city's land is water. Colorado Springs is located within the 927 square miles (2,400 km2) Fountain Creek Watershed, which is part of the Arkansas River watershed to the south. Fountain Creek's source is northwest of the city near Woodland Park. It meets up with Monument Creek in Colorado Springs and Fountain Creek then flows downstream to Pueblo, where is merges into the Arkansas River. Other creeks in the area are Bear Creek, Sand Creek, and Cottonwood Creek. There are two natural lakes and five reservoirs. The bodies of water are important for recreation, like hiking and fishing, and serve as wildlife habitats. Wetlands, like Tejon Marsh and Monument Valley Park, provide habitat for wildlife, birds, and fish. Water from the nearby mountain provide the city's water supply.

Initiatives have been implemented to ensure water quality, improve water drainage, and optimize recreational use. In 2011, the Fountain Creek Watershed completed its master plan to limit pollution entering the stream. It also implemented programs for educational experiences, recreational activities, and stable wetlands. Trails were created and improved along Fountain Creek within Colorado Springs and to Pueblo. Adopt-a-Waterway is managed by the city's Stormwater Engineering Department to keep the trails and waterways clean.

The largest land use category is vacant and agricultural land at 32% in 2012 of land in the city. More than half of the land (57%) in this category is in the 24,000 acre Banning Lewis Ranch on the city's eastern edge. Another key geographical location for future development is the northern edge of Colorado Springs. Like Pueblo and Denver, undeveloped land in and around the city is often used for livestock grazing and farming.

All content from Kiddle encyclopedia articles (including the article images and facts) can be freely used under Attribution-ShareAlike license, unless stated otherwise. Cite this article:
Geography of Colorado Springs, Colorado Facts for Kids. Kiddle Encyclopedia.