Born into a traditional military family he was the son of Brigadier-General Sir Charles Philip Martel who was Chief Superintendent of Ordnance Factories. He married Maud Mackenzie on 29 July 1922 and they had two children, a son, Major Peter Martel, MC, born 1923 and a daughter, Gillian, born 1925.

Martel entered the Royal Military Academy, Woolwich in 1908 and was commissioned as a second lieutenant into the British Army's Royal Engineers on 23 July 1909. Martel was instrumental in the establishment of The Royal Navy and Army Boxing Association in 1911 and was Army and Inter Services boxing champion both before and after World War I.

In 1916, as a sapper officer with direct experience of the first British use of tanks on the Somme, Martel was put in charge of recreating a 1.5-mile (2.4 km) wide replica of the British and German trench systems, complete with no man's land, at Elveden, Norfolk, as part of a tank training ground.

There he developed a keen interest in tank theory believing them to be the future of warfare and in November 1916 he wrote a paper, A Tank Army, suggesting an army composed entirely of armoured vehicles. As J. F. C. Fuller's GSO3 the wide-ranging ideas set out in this paper profoundly influenced Fuller's thinking which at the time simply regarded the tank as no more than a useful adjunct to infantry on the battlefield. Martel was also interested in the construction of wire net roads as deployed in the British Army's 1917–1918 campaign in the Sinai and Palestine and their use in supporting tracked vehicles.

In late 1916, Martel was on Hugh Elles' staff at Bermicourt in France assisting Fuller on the operational planning that culminated in the British tank tactics employed at the Battle of Cambrai.

In 1919, now a Major, Martel was able to combine his two interests of tanks and military bridging when he became head of the Experimental Bridging Establishment at Christchurch, Hampshire, which researched the possibilities of using tanks for battlefield engineering purposes such as bridge-laying and mine-clearing. Here he continued trials on modified Mark V tanks. The bridging component involved an assault bridge, designed by Major Charles Inglis RE, the Canal Lock Bridge, which had sufficient length to span a canal lock. Major Martel mated the bridge with the tank and used hydraulic power generated by the tank's engine to manoeuvre the bridge into place. For mine clearance the tanks were equipped with 2-ton rollers.

Martel also developed his new bridging concept at the EBE, the Martel bridge, a modular box girder bridge suitable for military use. The Martel bridge was adopted by the British Army in 1925 as the "Large Box Girder Bridge". A smaller version, the Small Box Girder Bridge, was also formally adopted by the Army in 1932 and copied by many countries, including Germany, who called their version the Kastenrager-Gerät (K-Gerät for short). The United States created a copy, the H-20. The modular construction of the basic Martel bridge was also used for the Bailey bridge. In 1954, the Royal Commission on Awards to Inventors awarded Martel £500 for infringement on the design of his bridge by the designer of the Bailey bridge, Donald Bailey.

Martel also continued to pursue his interest in tanks independently. In 1925 he built, in his own garage, a one-man tankette powered by a car engine and capable of a speed of 15 mph (24 km/h). After a demonstration to the War Office, Morris Commercial Cars was contracted to build four test models, the first of which was delivered in 1926. Carden Loyd Tractors built a similar one-man machine, the Carden Loyd One Man Tankette.

In 1927, eight more Martel tankettes were ordered to assess their potential role in forward reconnaissance. They were tested along with two-man Carden Loyd tankettes in manoeuvres with the Experimental Mechanized Force on Salisbury Plain in 1927 and 1928 when Martel was commanding officer of a company of Royal Engineers stationed there.

The idea for a single-man fighting vehicle was soon dropped as it became apparent that one operator could not control the vehicle at the same time as firing a weapon and the British Army requirement for a light tank, the Light Tank Mark I, was a development of the Carden Loyd tankette. Morris Motors tried developing a two-man version of the Martel design and Crossley Motors a further version - the Morris-Martel - in 1927 with Kégresse rubber tracks but after two prototypes were tested the project was abandoned.

In 1928, the Tank and Tracked Transport Advisory Committee that Martel was a member of became the Mechanical Warfare Board which was to liaise with industry and to advise on technical matters relating to "mechanised transport". In 1929, Martel was seconded to the King George V's Own Bengal Sappers and Miners and then served as an instructor at the British Indian Army's Staff College in Quetta from 1930 until 1934. From 1936 until 1939, Martel served at the War Office, firstly as Assistant Director of Mechanisation, then from 1938 as the Deputy Director with the temporary rank of Brigadier. In 1936, he attended a large-scale tank exercise in the Belorussian Military District of the Soviet Union in which numbers of the Soviet variant of the Carden Loyd tankette, the T-27, took part.

In the prelude to the Second World War, Martel was appointed General Officer Commanding the 50th Northumbrian Division, Territorial Army in February 1939 with the rank of Major-General. The division had been converted from October 1938 to "motorised" with the whole of the infantry being carried by large lorries.

With the outbreak of war, 50 Division embarked for France on 14 September 1939 as part of the British Expeditionary Force. There, on 21 May 1940 during the Battle of France, Martel directed the tank attack on Generalmajor Erwin Rommel's 7th Panzer Division in the Battle of Arras in which the German frontline was driven back eight miles. The gains could not be held, but the Germans were forced to cease their offensive and regroup, so buying time for the BEF's evacuation from Dunkirk.

Following the BEF's evacuation, Martel became the Commander of the Royal Armoured Corps in 1940 where he put his theories of armoured warfare to good use. In March 1941, he gave the military attaché of the then neutral United States in London, Brigadier General Raymond E. Lee, a report outlining his experiences and assessment of the German armoured tactics in France. 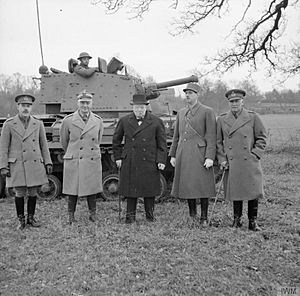 Martel was promoted to Lieutenant-General in 1942 but was moved from the Royal Armoured Corps that September and the position of commander was abolished. He then spent some time on postings in Burma and India.

In March 1943, Martel became the Head of the Military Mission to the Soviet Union. He assessed the effectiveness of the Soviet order of battle and tactics during a visit to the frontline in the Kursk-Oryol region between 11 and 19 May 1943. In his autobiography, Martel describes advising the Soviet High Command, Stavka, to allow the Germans to strike first at the Battle of Kursk. To what extent his advice affected the course of the battle is debatable since his first conference with Stavka did not occur until late May 1943 while the Soviet Western Front commander, Marshal Georgy Zhukov, had been advocating the same tactic since the previous March. However, Martel's advice that the most effective way of preventing the enemy from exploiting a breakthrough was by pushing on the "shoulders" (or "haunches") of the penetration may have proven useful.

His subsequent reports based on his visit to the Soviet front line and his discussions with the Red Army Tank Directorate concluded that the Soviet battlefield experience would be far more relevant to armoured tactics in the forthcoming invasion of Normandy than that of the experience of the British Army in the North African Campaign. Martel's intelligence-gathering and his clear and perceptive analyses of the Soviet military position were commended by his superiors at the War Office, but with the arrival of the new and overtly anti-communist Head of RAF Mission, Air Marshal Sir John Babington in September 1943 his working relationship with the Soviets deteriorated with a marked decline in co-operation. He was recalled, being replaced by Lieutenant-General Montagu Brocas Burrows and left Moscow on 7 February 1944. Later that month, he lost his right eye as a result of a German bombing raid on London.

Martel was knighted in 1943 and retired from the Army in 1945 with the rank of Lieutenant-General. He stood unsuccessfully as the Conservative Party candidate for the Barnard Castle constituency in the 1945 UK General Election.

On his retirement, Martel wrote on military matters. He died at his home in Camberley, Surrey, on 3 September 1958.

All content from Kiddle encyclopedia articles (including the article images and facts) can be freely used under Attribution-ShareAlike license, unless stated otherwise. Cite this article:
Giffard Le Quesne Martel Facts for Kids. Kiddle Encyclopedia.