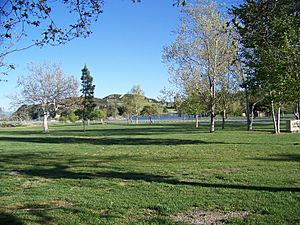 Glen Helen Regional Park is a county park located in San Bernardino, California, United States adjacent to the Cajon Pass. It was the site of both US Festivals of the early 1980s. It is also home to the Glen Helen Amphitheater, the largest outdoor amphitheater in the United States. The park also hosts several off-road races since 1985.

Glen Helen Regional Park is the site of California Historical Landmark NO. 573 Sycamore Grove, designation given on April 1, 1957. Its location is at Glen Helen Regional Park, 2555 Devore Rd, 0.7 mi W of Devore. Sycamore Grove was the first rest stop after the old Native American Mohave Trail left the West Fork Mojave River, following the trail, to cross the San Bernardino Mountains at Monument Peak, descending into Cajon Canyon on the ridge between Cable Canyon and Devil Canyon. This route was used by Father Francisco Garcés in March 1776 and Jedediah Smith in 1826.

"... this was the most beautiful spot; a small valley dotted with large sycamores and clover nearly waist high."

For several months in 1851 the grove was the camp for the Mormon colonists who were negotiating the purchase of the Rancho San Bernardino, that became the site of their colony, later the city, of San Bernardino.

In 1847, the wagon road known as the Mormon Road, between Salt Lake City and Los Angeles, was pioneered by a party of Mormons under Captain Jefferson Hunt. This wagon road closely followed the western part of the Old Spanish Trail from Parowan, diverting where necessary to allow wagons to pass. Sycamore Grove was the stop on that road at the foot of the Cajon Pass. This wagon road was used during the California Gold Rush by Forty-niners and later immigrants to California seeking to avoid the fate of the Donner Party, crossing the snow-bound Sierra Nevada in winter.

Between June and September 1851, Sycamore Grove was the first camp of the parties of Mormon colonists, who founded the city of San Bernardino. They included groups led by Captain Jefferson Hunt, Amasa Lyman, Charles C. Rich, David Seely, and Andrew Lytle.

Glen Helen has hosted off-road races since 1985. Its motocross track is known for its steep hills, jumps and banking. It hosted a round of the AMA Motocross Championship in 1993, later from 1996 to 2009, and currently since 2014. It is typically held in May, originally on Mother's Day and currently on Memorial Day, except from 2004 to 2007, when it held in mid September as the final round.

All content from Kiddle encyclopedia articles (including the article images and facts) can be freely used under Attribution-ShareAlike license, unless stated otherwise. Cite this article:
Glen Helen Regional Park Facts for Kids. Kiddle Encyclopedia.