Glendaruel is a glen in the Cowal peninsula in Argyll and Bute, Scotland.

The main settlement in Glendaruel (Gaelic: Gleann Dà Ruadhail) is the Clachan of Glendaruel. 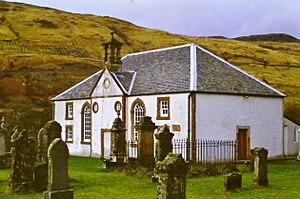 The ruined Dunans Castle is also located in Glendaruel, while Glendaruel Wood and Crags and the Ruel Estuary are both included in the List of Sites of Special Scientific Interest in Mid Argyll and Cowal.

As the nearest Hospital is some miles away in Dunoon, a disused phone box in the village was converted to house a defibrillator. Just weeks before the installation, a tourist in Glendaruel had died from a heart attack.

The community is home to around 188 people as of 2008 and has been subject to a general decline in the late 20th century continuing into the early 21st century. The closure of the Glendaruel Hotel, a 17th-century coaching inn housing the only local pub, was in particular described as "a body blow." The hotel closed not long after a widely publicized legal case was won by three Polish former employees who had been described as "Polish Slaves" by the hotel proprietors. Over the past two decades a number of facilities within the community have been lost, notable examples include the post office, general store and tearoom with even Kilmodan Church becoming part-time, holding services only 2 Sundays in a month.

Glendaruel is marked out at government level as a typical example of a 'failing' rural village in an area of 'deprivation'.

Kilmodan Primary has been earmarked for closure at various times in recent decades including in 1998 and in 2010 when the school roll stood at just 22 students. As of June 2012 the school had "two teachers, 19 pupils and handful of support staff."

Glendaruel is thought to be one of the glens praised in the Gaelic poem "The Lament of Deirdre", in which reference is made to a Glenndaruadh. It is found in the 15th-century Glenmasan manuscript, which may go back to an original written down in 1238. Deirdre is a tragic heroine in Irish mythology, and in the poem she is lamenting the necessity of leaving Scotland to return to Ireland.

All content from Kiddle encyclopedia articles (including the article images and facts) can be freely used under Attribution-ShareAlike license, unless stated otherwise. Cite this article:
Glendaruel Facts for Kids. Kiddle Encyclopedia.