Golva is a city in Golden Valley County, North Dakota, United States. The population was 61 at the 2010 census. Golva was founded in 1915.

Golva is located in Lone Tree Township. The homesteaders that arrived in the area between 1900 and 1910 found only one tree in the area. That tree was standing about one mile (1.6 km) east of modern-day Golva till it died around 1980. According to the Homestead Act, the homesteaders got 160 acres (0.65 km2) if they lived on the land for 7 years. In western North Dakota, they were also given another 160 acres (0.65 km2) if they planted trees on the land, so there are now trees around most farmsteads in the area. The last living homesteader from the Golva area, Mrs. George (Emma) Geary, died in 1978, still owning her homestead and the house on it, although she had left the homestead in 1958 after breaking her hip. The doctors told her, due to the seriousness of the break, she would be bedridden for the rest of her life. Being a true pioneer, she responded "The hell I will". She walked with one crutch and lived alone until shortly before her death at 89. Her neighbor for over 40 years, Eva Weinreis, wrote an autobiography entitled A Note On the Tea Kettle about her life and coming from Aberdeen, South Dakota in 1906 with her husband, Peter Weinreis, to homestead two miles (3 km) west of Burkey, North Dakota and two miles (3 km) south of modern-day Golva. The book told of the early history of the Golva area.

Golva was founded in 1915, when the Northern Pacific Railroad line came down from Beach, North Dakota. It was originally supposed to be the county seat of Golden Valley County and got the name Golva from the first three letters of Golden and first two letters of Valley, the name having been suggested by the original townsite owner, A.L. Martin. The "Golden Valley" name comes from the rolling valleys of golden wheat just before harvest. Prior to 1915, most of the local businesses were in Burkey, situated about four miles (6 km) southwest of Golva. St Mary's Catholic Church was built in Burkey in 1906, but moved to Golva shortly after it was founded. Other businesses moved from Burkey to Golva and Burkey literally disappeared within a couple of years. Golva once had a business community which consisted of a hardware store, a grocery store, a car dealership, a lumberyard, two grain elevators, two bars, a few restaurants, and several other businesses. As of 2007, the only business in the city include a lumberyard, a gas station, a bank, a grocery store, a grain elevator, and one church. 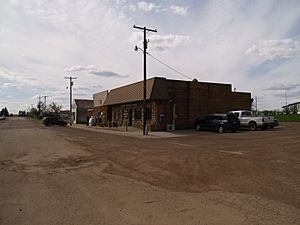 According to the United States Census Bureau, the city has a total area of 0.33 square miles (0.85 km2), all of it land.

There were 37 households, of which 21.6% had children under the age of 18 living with them, 29.7% were married couples living together, 5.4% had a male householder with no wife present, and 64.9% were non-families. 62.2% of all households were made up of individuals, and 21.6% had someone living alone who was 65 years of age or older. The average household size was 1.65 and the average family size was 2.77.

According to the Köppen Climate Classification system, Golva has a semi-arid climate, abbreviated "BSk" on climate maps.

All content from Kiddle encyclopedia articles (including the article images and facts) can be freely used under Attribution-ShareAlike license, unless stated otherwise. Cite this article:
Golva, North Dakota Facts for Kids. Kiddle Encyclopedia.