Government of Birmingham facts for kids

Location of Birmingham within West Midlands

This article is about the Government of Birmingham, England. 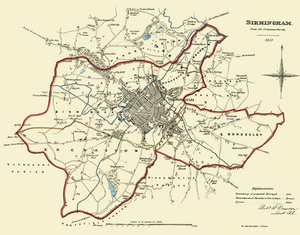 The proposed Parliamentary Borough of Birmingham, surveyed in 1831 for the Great Reform Act by Robert K. Dawson

Most of Birmingham was historically a part of Warwickshire, though the modern city also includes villages and towns historically in Staffordshire or Worcestershire.

Until the 1760s, Birmingham was administered by manorial and parish officials, most of whom served on a part-time and honorary basis. By the 1760s the population growth of Birmingham made this system completely inadequate, and salaried officials were needed. In 1768, a body of "Commissioners of the Streets" was established who had powers to levy a rate for functions such as cleaning and street lighting. They were later given powers to provide policing and build public buildings.

The Reform Act of 1832 gave Birmingham its first representation in Parliament initially with only two MPs but this has been gradually expanded. 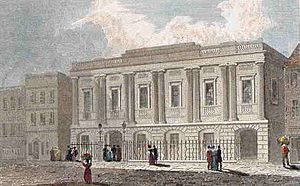 The Public Offices in Moor Street in 1830

Birmingham gained the status of a municipal borough in 1838 and gained its first elected town council which took over the functions of the Street Commissioners. In 1889, it became a county borough (unitary authority) and a city. This remained unchanged until 1974 when Birmingham became a metropolitan district of the newly created West Midlands county under the West Midlands County Council. The county council was abolished in 1986 and Birmingham effectively reverted to being a unitary authority although sharing some services with other authorities in the county.

A Birmingham coat of arms was awarded to the corporation in 1889 and updated for the city council in 1977.

In the past, the council has been responsible for water, electricity and gas supply, further education colleges, public transport and local police and fire services. All are now in the hands of other public- or private- sector bodies. 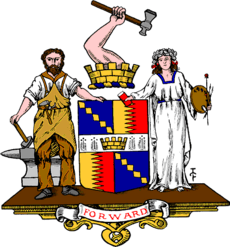 Coat of arms of Birmingham, as granted in 1889, including an ermine fess (white horizontal band) across the centre to represent Edgbaston

Birmingham's boundaries were expanded at several times during the 19th and 20th centuries.

It was expanded in 1891 under the City of Birmingham Extension Order by adding Harborne from Staffordshire and Balsall Heath from Worcestershire, as well as Saltley, a further part of Aston parish. Quinton in Worcestershire was added in 1909.

1911 saw a large expansion under the Greater Birmingham Scheme, with the addition of Aston Manor and Erdington from Warwickshire, Handsworth from Staffordshire, and Yardley and the greater part of King's Norton and Northfield from Worcestershire. Perry Barr in Staffordshire was added in 1928. In 1931, parts of the parishes of Minworth, Castle Bromwich, Sheldon and a tiny part of Solihull were added, including the area of Castle Vale, then known as Berwood.

Birmingham was reconstituted on 1 April 1974, under the Local Government Act 1972, as a metropolitan district, which covered both the former county borough of Birmingham, and the municipal borough of Sutton Coldfield.

Birmingham's first two members of parliament were Thomas Attwood and Joshua Scholefield who were elected when the town was enfranchised in 1832, following the Great Reform Act.

Birmingham's ten parliamentary constituencies are represented in the House of Commons by one Conservative and nine Labour MPs.

All content from Kiddle encyclopedia articles (including the article images and facts) can be freely used under Attribution-ShareAlike license, unless stated otherwise. Cite this article:
Government of Birmingham Facts for Kids. Kiddle Encyclopedia.