Great Blasket (Irish: An Blascaod Mór) is the principal island of the Blaskets, County Kerry, Ireland.

The island lies approximately two kilometres from the mainland at Dunmore Head, and extends six kilometres to the southwest, rising to 292 metres at its highest point (An Cró Mór). The nearest mainland town is Dunquin; a ferry to the island operates from a nearby pier during summer months.

A Ferriter castle once stood at Rinn an Chaisleáin.

The island was inhabited until 1953 when the Irish government decided that it could no longer guarantee the safety of the remaining population; however, the Islanders had been requesting that they be relocated since 1947. It was the death of Seánín Ó Cearnaigh that acted as a catalyst in the island's evacuation. Sean had become ill and as a result of poor weather, no doctor or priest could reach the island. Inclement weather prevented his body being taken to the consecrated graveyard across the Blasket Sound in Dunquin for a number of days. It was this tragic event that led the Islanders to contact the Irish government and request that they be evacuated.

It was the home of three noted Irish writers: Tomás Ó Criomhthain, Peig Sayers and Muiris Ó Súilleabháin. Their works were all written in Irish, and have all been translated into English, as well as other languages. The home of Muiris Ó Súilleabháin is now in ruins but Peig Sayers second home she lived in on the island has been restored and used to form part of the hostel which previously functioned on the island. The home of Tomás Ó Criomthain was also restored by the OPW in 2018 and is free to visit by the public.

Until 1953, the inhabitants of Great Blasket Island formed the most westerly settlement in Ireland. The small fishing community (even at its peak the population was hardly more than 160) mostly lived in primitive cottages perched on the relatively sheltered north-east shore. In April 1947, having been cut off from the mainland for weeks due to bad weather, the Islanders sent a telegram to the Taoiseach, Éamon de Valera, urgently requesting supplies which duly arrived two days later by boat.

In 2014, Billy O'Connor began renovation of the Congested Districts Board properties on the island and has since opened the restored cottages for rental during the summer season. His company, The Great Blasket Island Experience, recruits two caretakers annually to manage the accommodation and café on the island, where they live without electricity and hot water.

In 2019, Lesley Kehoe and Gordon Bond documented their experience of living and working on the island for six months on social media, attracting international media attention.

The following year, the job application attracted thousands of applicants from around the world and the position was filled by Eoin Boyle and Annie Birney, a couple from Dublin.

The table below reports data on Great Blasket's population taken from Discover the Islands of Ireland (Alex Ritsema, Collins Press, 1999) and the Census of Ireland. 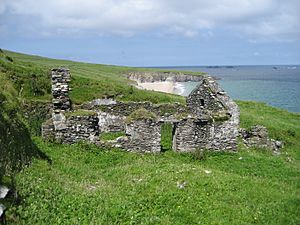 An abandoned home on the island 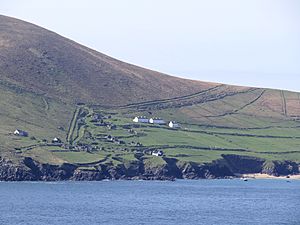 The hostel and cafe on the island were once closed as a result of a dispute between the Irish State which wishes to make the island a national park and an individual who claims to own the greater part of the island. The differences between the State and Blascaoid Mor Teoranta (BMT) were settled by an agreement made in August 2007; subject to the granting of planning permission, the deal meant that more than 95% of the island land, including the old village, would be sold to the State and become a de facto national park. In 2009 the Office of Public Works bought most of the property on the island, including the deserted village, and the state is now the majority landowner. Guided tours of the island were launched in 2010 and plans are underway for the preservation and conservation of the old village.

All content from Kiddle encyclopedia articles (including the article images and facts) can be freely used under Attribution-ShareAlike license, unless stated otherwise. Cite this article:
Great Blasket Island Facts for Kids. Kiddle Encyclopedia.