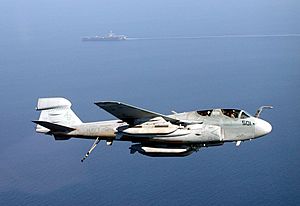 Grumman EA-6B Prowler of the US Navy.

The Grumman EA-6B Prowler is a military aircraft. It is a version of the A-6 Intruder. It is used as electronic warfare aircraft for radar jamming. It was never exported. It is used only by the US Navy and the US Marines Corps. After 2021, it will be replaced by Boeing EA-18 Growler.

The EA-6B Prowler was used in the Vietnam War, in the Gulf War, and in the war of Kosovo. It was used in Afghanistan's war against al-Qaeda.

All content from Kiddle encyclopedia articles (including the article images and facts) can be freely used under Attribution-ShareAlike license, unless stated otherwise. Cite this article:
Grumman EA-6B Prowler Facts for Kids. Kiddle Encyclopedia.