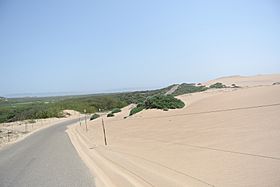 Transition zone (back dunes) in Guadalupe

Bordered by the Pacific Ocean to the west and farmland to the east, the refuge encompasses one of the largest coastal dune systems remaining in California.

The refuge is situated in the heart of the Guadalupe-Nipomo Dunes which is protected through a partnership program among Federal, State, and private landowners for the cooperative management of coastal resources. This cooperative effort enables all partners to share limited resources to meet common goals, such as endangered species management and the removal of invasive species that threaten this fragile habitat.

Public access is provided by neighboring State and County park properties. The refuge offers a unique wilderness experience not found in the other parts of the Guadalupe-Nipomo Dunes.

Other recovering endangered species that use the refuge include large flocks of brown pelicans and a pair of peregrine falcons. The refuge contains healthy populations of mule deer, bobcat, and mountain lion, as well as large flocks of wintering shore birds and waterfowl.

All content from Kiddle encyclopedia articles (including the article images and facts) can be freely used under Attribution-ShareAlike license, unless stated otherwise. Cite this article:
Guadalupe-Nipomo Dunes National Wildlife Refuge Facts for Kids. Kiddle Encyclopedia.